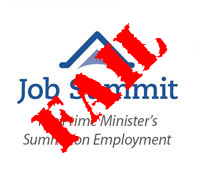 The number of officially unemployed people (those looking for work, able to work, but without a job) is at 150,000 for the first time since the dark days of the late-80s/early-90s recession brought on by the neoliberal revolution. That’s up from 80,000, the 20-year low point, at the end of 2007.

Total hours worked – the best measure of the state of the work-force, far better than the unemployment rate – fell 0.8% in the September quarter. We now collectively work 3.2 million fewer hours per week than at the peak in June last year.

Anyone who thinks this recession is over should ask the steadily growing army of the unemployed.

* these are the seasonally adjusted figures, without seasonal adjustment 23,000 jobs were lost.