NZ falling in education under Nats

The other day, David Farrar helpfully linked to an international report (here, here, and here) into achievement in education. Somehow though, he missed the part where educational achievement rose in all but one measure under Labour and then fell in each measure under National. 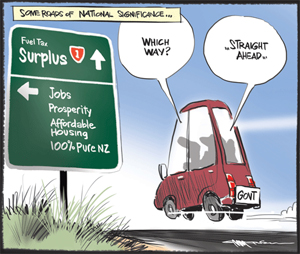 Japan just elected a Liberal Democrat government promising more jobs through a huge quantitative easing programme. The US has stated it’ll continue QE until unemployment drops below 6.5%. The effect has been to send our dollar to new highs, killing exporters and import-exposed local businesses. Contrary to media belief, Japan and the US aren’t in worse positions than us.

If you and I were told that (variously) our sons and daughters, grandchildren, nieces and nephews were going to be killed tomorrow, would I be right to suspect that we might sit up and take notice?

An anonymous editorial in The Herald yesterday suggested that the government raise revenue by cutting the “sacred cow” of interest free student loans.  For some strange reason the sacred cow of National’s tax cut bribe for the rich was not similarly offered up for sacrifice.  I wonder why that might be.

Wellington Council has voted to spend some time looking at a new alternative to the Basin Fly-over plan. The government’s response has been to threaten the council that other transport investment in Wellington will be scrapped unless they get their concrete monstrosity built. In related news, NZTA systemically under-estimates the costs and overstates the benefits of roading projects.

Parata isn’t the most corrupt minister Key has but she’s definitely the most incompetent. Now, the Secretary of Education has been paid out to take the fall for Hekia’s incompetence and that of her sister, Apryll, Deputy Secretary Performance and Change. Parata has maintained her reputation for nepotism being an appalling people manager. But she won’t go, and Key won’t make her.

We’re on track to reach half a million comments before the week is out. Who will be number 500,000? As always, its nice to mark these milestones because it’s a reminder of what a big and vibrant community this is. Those half a million comments have sure made writing here a lot more fun than it would have been if no-one wrote back. Cheers.

Can’t say that I blame Longstone for bailing, she was working for a Minister who is clearly well out of her depth.  Another fail for Hekia Parata,  she’s the one that should be going.

So, National’s still on track to surplus in 2014/15, eh? A $66m surplus. Well, don’t be counting those chickens just yet. That projected surplus is just 0.07% of projected spending and revenue that year. That makes wafer thin look fat. And it’s not exactly like Treasury has a good record predicting 2.5 years ahead. But there’s a bigger question: is any surplus worth any price?

In Budget 2011, National made a big song and dance over the projection that ‘they’ would create 170,000 jobs in the next four years. Leaving aside the fact that they were counting jobs from the year before in their four year total, the promise basically rested on creating 57,000 jobs this year. So, what’s the latest update on that figure? … 0.

How to mess up “good” news

Trying to distract attention from the increased taxes required to maybe balance the budget one day, Key was pushing supposedly good news on health.  Instead he scored a social media own goal.  Ooops.

This is one of a series of posts I hope to write over the summer based to some extent or other on a recent presentation by Kevin Anderson: Professor of Energy and Climate Change, University of Manchester, Tyndall Centre.

Making you pay for their folly

Well it looks like the government has finally listened to all of the arguments about how unaffordable the Roads of National Significance are.

Their response? To tax you more to pay for their white elephant.

The spinmeister of Planet Key: Retrospective

On TV3 this morning, John Key was soothing and slick.  All is well on Planet Key, and critics are delusional.  He reeled of numbers and facts, but material realities of daily lives, and the suffering of people on low incomes aren’t mentioned. And asset sales?

Recent pieces by Bernard Hickey and John Armstrong both highlighted the problem of our aging population and the unsustainability of super – in Hickey’s memorable words we are “consuming our future”.  Armstrong tries to balme MMP, but that won’t wash, it’s just the usual short-sighted Nat stupidity…

Greens pony up for a second cable

Market failure is one of the marks of our time. From unaffordable, low-quality housing to child poverty to the over-valued dollar killing jobs to over-priced broadband and failed government IT procurements, the market keeps getting it wrong. The Greens and Labour know the answer is for the Government to step in; National just turns a blind eye. Russel Norman did it again yesterday.

I’m sure our thoughts are all with Fiji as it braces itself for disaster.

David Shearer was on TV 3 this morning, reflecting on his last year. He claimed that he and Labour are doing well under new and settled leadership, taking a new direction.  How accurate are his claims?

Port workers show how its done

You have to respect how the Ports of Auckland workers stood staunch in the face of the bosses’ attempt to contract out their jobs, without support from the ‘leftwing’ mayor and against an expensive PR effort. They’re still getting their own back. PoAL has just been fined for employing a strikebreaker. And, in Lyttelton, wharfies have started a smart new campaign.

Key was wrong about boot camps.  He’s wrong about education, the environment, the democratic rights of Canterbury, the miraculous power of cycleways, the economy, New Zealand’s international obligations on climate change, and much more besides. Every year in office this arrogant government does yet more damage.

Looking for Christmas gift ideas?  There are plenty of ways to give a gift that will really make a difference.  Here’s a small selection.

My regular Sunday piece of interesting, longer, deeper stories I found during the week. But this week it’s mainly your chance for you to share what you found this week, as I’m off overseas for a month by the time you read this.