The serious aspect of New Zealand life I am specifically referring to is the appalling over representation of males in the perpetration of sexual and domestic violence. When reading this please keep in mind that the Government of the day has the most power to implement the biggest  change and there are MANY charities and other NFP organisations trying to do that and with quite some success, both in assisting victims and perpetrators and in education. The simplest thing would be to roll out existing, and proven effective programmes in schools for the first term next year. It is not sex education (that is a red herring) it is RESPECT education.  Some of this is being done through the Health Curriculum, but not enough. Our group reluctance to go hard at this issue from every angle speaks to our acceptance of it, or denial of its breadth. It is costing lives, childhoods, and money (lots of it) to keep doing the minimum.

Now, because biggest change always starts at the top, let’s get on with “Man” of the Year 2014

Of the allegations of rape against a group of young men, who had been bragging about their conquests on facebook, John Key said

“These young guys should just grow up,” .

“I guess, as a parent, I find the issue very disturbing and abhorrent really.

“I mean, you are talking about youngsters who are at a very delicate age.”

Key defended the work of police.

“It is very difficult to progress this issue, if someone isn’t prepared to make a formal complaint.

“And it’s a very challenging situation for a young woman to put herself in that position.”

The words read ok, although seem to cover a lot of bases. So what actions followed?

Any changes to reflect the Prime Minister’s abhorrence? A Law Commission Report into aspects of sexual violence and law changes was made available to the PM and Cabinet in 2012. New Justice Minister, Amy Adams, has asked (25 November 2014) that the Law Commission “revisit” it’s work on alternative pre-trial and trial processes to identify options for improving complainants’ experience in court. So far nothing to help young boys grow up into men who don’t brag about sex with under age and drunk girls. Still focused on ambulance at the bottom of the cliff. But curiously it suggests they agreed with David Cunliffe (see below).

She said National cut Refuge’s baseline funding by $700,000 in 2011 and had never restored it, although “one-off” grants for training and other extras had raised the movement’s total funding from $6.2 million in 2008 to $9.2 million today.

“That might include a position in Timbuktu to write a children’s programme, it’s not an effective use of money,” she said.

On the Malaysian Diplomat accused of attempted rape of a New Zealand woman Mr Key initially offered an apology to the alleged victim,

“I don’t know her name. Obviously it’s a matter of privacy, but I think there’s been plenty of public comments that would echo what I’ve just said,” he said.

Asked whether he would apologise if he did know her name, Mr Key said: “Yes, in so much that I believe that she shouldn’t have had to go through what she went through.”

then later said that

Later, when caught on the hop about the inexplicable escape of murderer and paedophile, Phillip Smith, he joked

I’ll just let her know that you know, there’s someone that could be out there from New Zealand she might not want to invite around for lunch

He offered an apology of sorts, so that must have qualified as a “serious reason to”. It rather makes me wonder what Farrar’s polling revealled about fellow kiwis attitudes?
Last week during his busy time as PM, Key stopped at loads of FM radio stations and proudly wore a t-shirt proclaiming that he is not sorry to be a man. 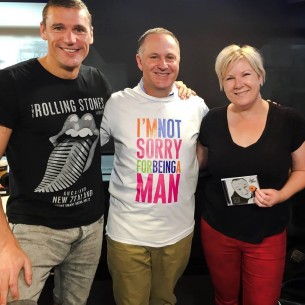 Former leader of the Labour Party

made a widely and longly (over weeks) mis-reported and referred to statement which was then systematically and deliberately taken out of context. What he actually said was

Can I begin by saying I’m sorry – I don’t often say it – I’m sorry for being a man, right now. Because family and sexual violence is perpetrated overwhelmingly by men against women and children,

So the first message to the men out there is: wake up, stand up and man up and stop this bullshit!’

Womens Refuge run 24 hour a day 7 day a week centres and call answering service to female victims of sexual and domestic violence. They answer phones, arrange housing and care, provide counseling and other services. The Government of New Zealand, in return for this mammoth and soul destroying service offer each centre $100,000 per year. In that speech he pledged a further $15m, a year for Womens Refuge work

The government and media cynically allowed the focus to be on ridiculing Cunliffe and avoiding discussion about the appalling failure to protect women and children from the overwhelmingly male perpetrated sexual and domestic violence in New Zealand.

The announcement by Amy Adams to let the law Commission further its work was Labour party election policy. Judith Collins had earlier halted the work and rubbished Labour’s plans

Labour said it would consider:

• Changes cross-examination rules to ensure that victims of sexual cases were not “put on trial”.
• Allowing complainants in sexual offence cases to adopt alternative trial processes such as restorative justice.
• Specialist courts to hear sexual violence cases.
• Changing the definition of consent in cases of sexual violation so that it doesn’t impose “an unfair burden” on victims.

Mrs Collins and Social Development Minister Paula Bennett dismissed Labour’s policy as “just smoke and mirrors”. (note A Little got his words wrong on this policy and unwittingly created a diversion from the crucial issue)

So, in this context what is a man? If it is just having a set of physiological features differentiating one from a woman, then it is hard to argue with John key’s pride.

BUT, if we return to the context within which all this began…

Perhaps, given some of the attitudes apparent in NZ today we should pop back a century for one take on it.

If you can keep your head when all about you

Are losing theirs and blaming it on you;
If you can trust yourself when all men doubt you,
But make allowance for their doubting too:
If you can wait and not be tired by waiting,
Or, being lied about, don’t deal in lies,
Or being hated don’t give way to hating,
And yet don’t look too good, nor talk too wise;

If you can dream—and not make dreams your master;
If you can think—and not make thoughts your aim,
If you can meet with Triumph and Disaster
And treat those two impostors just the same:.
If you can bear to hear the truth you’ve spoken
Twisted by knaves to make a trap for fools,
Or watch the things you gave your life to, broken,
And stoop and build’em up with worn-out tools;

If you can make one heap of all your winnings
And risk it on one turn of pitch-and-toss,
And lose, and start again at your beginnings,
And never breathe a word about your loss:
If you can force your heart and nerve and sinew
To serve your turn long after they are gone,
And so hold on when there is nothing in you
Except the Will which says to them: “Hold on!”

If you can talk with crowds and keep your virtue,
Or walk with Kings—nor lose the common touch,
If neither foes nor loving friends can hurt you,
If all men count with you, but none too much:
If you can fill the unforgiving minute
With sixty seconds’ worth of distance run,
Yours is the Earth and everything that’s in it,
And—which is more—you’ll be a Man, my son!