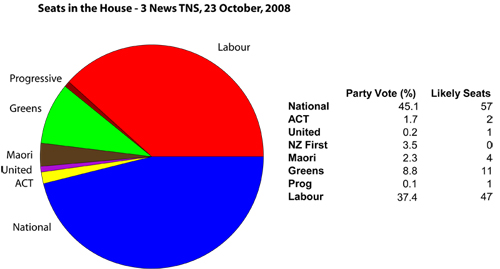 Tonight’s 3 News poll has the election wide open with two weeks to go, putting the Left on 59 seats to the Right’s 60.

3 News says that with the Maori Party in the kingmaker position it’s too close to call, but when Colin Espiner is promising to print out his blog and eat it live on webcam if the Maori Party goes with National I’d say a broad left LPG+M coalition is the likely outcome based on these results.

The Greens will be happy with 8.8% and are in a good position to improve on it. For middle class voters who are regretting their flirtation with National but still hold a grudge against Labour, the Greens seem a natural choice.

New Zealand First still can’t be written off either. While the party wouldn’t make it back on these results, at 3.5% and climbing there’s a decent chance they’ll reach 5% – or that Winston will win Tauranga. That would almost certainly rule out a National-led government.

So, overall, good news for the Left. Roll on tomorrow’s Roy Morgan poll.