The counter on the WordPress stats clicked over to more than 400,000 comments yesterday. I’d noted late last week that we were about to hit it and that I should really stop working for long enough to celebrate the event with some stats and explanations.

As at 10:30 today the dashboard showed this… 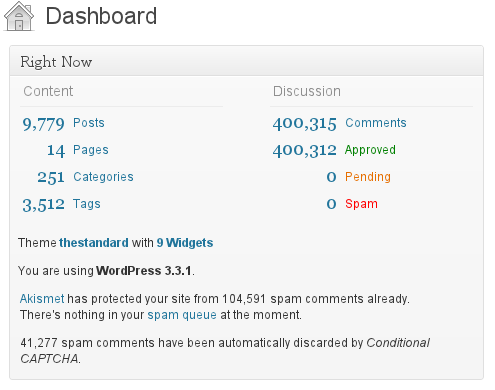 Which means that since I looked at it this morning when I got to work nearly a hundred more comments have been added. But like all numbers, the devil is in the detail and we know that there are a number of people around who distain accuracy prefer to lie with numbers. For instance, Bill English and his ‘neutral’ tax changes that cost a billion or so in deficit, treasury with their banking on levels asset sales in the budget that were a billions off,  and of course Cameron Slater who will selectively lie about with any number that comes to hand. But I digress…

Included in this number are pingbacks and trackbacks, which are links in from other sites using particular systems. Most are just spam and constitute about half of the nearly 150k comments caught in spam engines. But the ones that are mostly from humans  in the database tables, so we need to exclude them. So the SQL for wordpress is

select yearweek(comment_date_gmt) as yw, count(*) as count
from wp_comments
where comment_approved=1 and comment_type=''
group by yw
order by yw

The comment_type is blank for normal comments, and we’re only after the approved comments. I ran that at 08:30 when there were 400,222 approved comments. Dropping the results into a LibreOffice spreadsheet we get a culmulative total  391577 which means that there were 8645 pingbacks and trackbacks.

Ok, explanations over. Lets look at when we’re likely to hit 400k comments. Here is the culmulative chart with pointers to when we crossed each 100k comments. The charts are up to the end of last week; week 244 ATS (Anno The Standard). 😈 Ouch. I knew there was an increase from the rapid bulking of my mouse scroll muscles from moderating exercise. I’m expecting to hit 400k comments by my de-puffed projection in either week 247 or week 248 ATS.

We like to make a big deal over the comments because it is you coming on here, contributing your thoughts and ideas, that make The Standard what it is. Without all of you, it would just be a dozen or so people arguing with themselves, and if we wanted that we could hang out with the Libertarianz.

We  were a wee bit busy during the pre-election, as you can see from the graphs showing our comments by weeks and week in year. Quite amusing how clearly you can see that week between xmas and new year. Unlike the election in 2008, last years election didn’t really drop us back post new-year from the pre-election Sept/October. 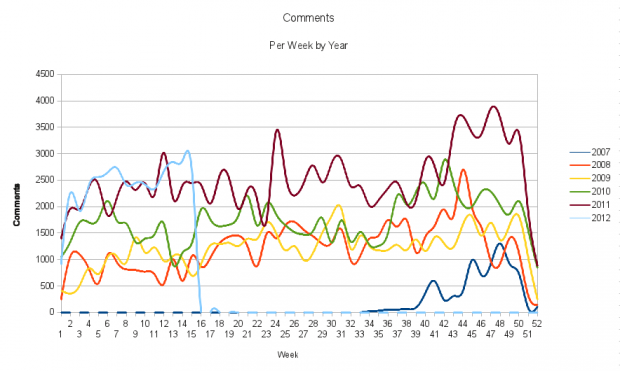 When you look at the detail, it is quite interesting looking at the differences between years. Apart form the predictable end of year slump, the election fevers, and the mid-winter slumping – the wee spikes are political events when everyone crowds on to the site and starts talking. The big dip in early 2010 was when the load went up too high for the server despite my numerous optimizing hacks and the site crashed

But these are the un-puffed stats about the ever increasing comment traffic to this site. They are one of my continuing nightmares that I check every quarter. I’m currently contemplating how we handle a 100k comments in a a quarter in either 2013 or 2014.

People come because they can get a good argument where you can mostly say what you think in a robust way. Our post-xmas action this year was quite instructive as our exhausted authors disappeared into the wilderness. The posts dropped to the daily OpenMike and the odd post as an author or editor resurfaced. Didn’t really slow the comments that much. The commentators just made their own fun… 😈

Sure we ban people who fail to live up to The Standard  while arguing. Or who waste the moderators time. Or who qualify for a Darwin award by attacking the site or it’s authors. All that ever does is increase our traffic because we remove the worst of the boring munters who just want to perform their meaningless rituals of talkback radio stupidity.

Of course in the net there is a place for everyone to go – even those unwilling to comment here or who are rejected from here. Locally, if you want genteel, then go to Public Address. If you want reasoned intellectual (and often boring) political debate then join Lew and co at Kiwipolitico. If you want the feminist viewpoint on politics then head to the Hand Mirror. If you want to enjoy talkback radio in text then go to ever reducing comments section at the Kiwiblog sewer, and if you want to exchange stories about dick sizes – then Whaleoil is your home… And there are heaps more.