This time last year, there was a smattering of posts put up about average global ocean and land surface temperatures. They didn’t make for comfortable reading.

Of course, last year the world was in the grip of an El Nino that boosts temperatures. So with its fading, we’d expect temperatures to drop off again. And they have. The world is now sitting in a state that is neither El Nino nor La Nina and there is some expectation that a La Nina will develop later in the year. 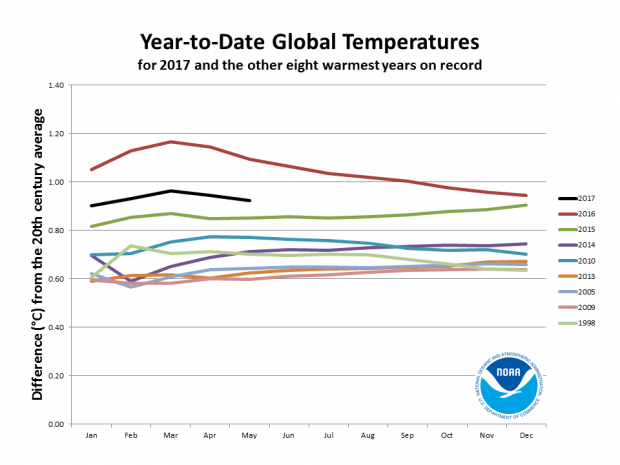 What about Copenhagen in 2009, where our governments made commitments to to “hold the increase in global temperature below 2 degrees Celsius, and take action to meet this objective consistent with science and on the basis of equity”?

There have been 22 COP meetings since the first one in Berlin in 1995. And here we are, living in a world that’s possibly already 1.5°C above pre-industrial temperature levels and well on the way to 2°C with a whole pile of really, really bad stuff locked in. And that’s with governments being committed to tackling global warming. So imagine how much worse it could all be if they had had their meetings where they’d patted one another on the back, released happy smiley photos and wads of paper containing fine sounding words, and then chosen to do a whole lot of nothing…Yup.

Meanwhile the city of Ahvaz in Iran, home to over 1 million people, has just experienced the hottest ever temperatures for the month of June for anywhere in Asia – possibly the hottest temperature recorded anywhere in the world since records began ~ 54°C with ~ 70% humidity.

I guess there might be a meeting in session about that somewhere.