Well that time rolled around again today some time. We are now past 800,000 comments. It seems like only yesterday that we were at 700,000. But it turns out that was just over 6 months ago.

I think that we are slightly ahead of the schedule that Eddie estimated back in December 2012. 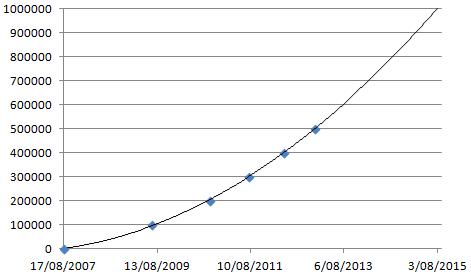 As anyone who reads the site for any length of time is aware, the comments make this site the community that it runs as. Most of the time they’re pretty interesting because we deal with people who want to transgress our policy with one of the many ways to disrupt debate. I read their forlorn comments in the auto-spam every day so others don’t have to. 😈

To comment here is a privilege that we automatically give to most guests. However dealing with people who want to waste moderator time coming into an election we can’t be bothered with. They tend to get bans lasting until after the election. Small wonder there will be a mass release of the banned after the election.

To give you an idea of just how much extra traffic we are getting. There were just under 200 people online just after the debate finished, who’d clicked into a page in the last few minutes. During the day at present, that is usually over a hundred *all* day. In the last 30 days, we’ve had nearly 850,000 page views, and just over 79,000 unique visitors reading the site.

This is the number of people that google can identify from their data as being unique. It is probably completely accurate for people like me who have gmail on all computer browsers. Less so for others. This is all well over double what it was in March.

And it doesn’t go down much after the election either. So I guess we will have to get used to it. However I now have the costs of running the server at this level down to less than $300 per month and falling. It isn’t as expensive as 3 months ago.

What hasn’t changed is that you humans are on average reading 3.2 pages per visit and spending an average of 7 minutes reading per visit. Note the average. In the last 6 hours 34% of the visits only lasted a few seconds, but 31% spent more than an hour on site.

Anyway, good luck with the election. Remember to vote early, and drag a few more people out to vote early on Saturday week. You know who they are…