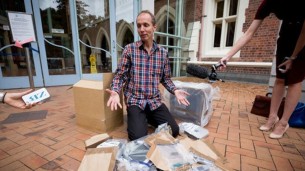 As widely covered yesterday, Nicky Hager has received – too little and far too late – a measure of justice for the “fundamentally unlawful” raid conducted on his home and family in the wake of Dirty Politics. Here’s one report:

Hager gets a victory

A victory for the investigative journalist Nicky Hager. He’s emerged from the High Court at Auckland clutching smashed clones of a computer hard drive and memory card which were seized during an unlawful police search of his home.

Police also returned the equipment and belongings seized in the raid.

Hager hopes it’ll reinforce protections for journalists and their sources, and prevent further “Rambo-style” raids. “I’m still gob smacked that police thought it was reasonable to arrive like Rambo and spend 11 hours doing over my house where they found nothing they wanted for their research.
…
Hager said he hoped the court case would ensure people weren’t afraid to share information with the media.
…
“I strongly believe that there will be no Rambo police raids into anyone like me or other parts of the media for a long time now, they’ve learnt their lesson. “They’ve lost comprehensively, and they’d have to be fools to do it again.”

Hager acknowledged the support that he received:

“This has been a long 17 months, and I’m eternally grateful to my lawyers and I’m very grateful to the people from the media and elsewhere who were my witnesses. “There are also hundreds of New Zealanders who have money towards the case because it cost a tremendous amount for this, and I hope they are joining in the sense of triumph today.”

The saga is not quite yet over for Hager, who said he expects to return to court for further issues with police behaviour.

Hager will also be exploring Westpac’s role in turning over his data to the police. Good.

Recall how all this started:

The search came after blogger Cameron Slater laid a complaint when information from his own computer, obtained by a hacker known as Rawshark, was published in Mr Hager’s book Dirty Politics.

A High Court judge later ruled the warrant used for it was fundamentally unlawful and that police failed to disclose relevant information to the judge that issued it.

Did National, on behalf of their dirty politics blogger, apply pressure to the police that forced this rapid action and the consequent bungles? It would be consistent with their many other politically motivated attacks on journalists.* John Key continuing in the fine tradition established by his hero Rob Muldoon.

* For example the raids on media offices over the teapot tapes; the attacks on Bradley Ambrose (who is now suing Key); the attacks on Jon Stephenson (for which he received an apology and compensation from the NZDF); the pressure applied to media over the “wages drop” incident (which led to a protest letter from Herald journalists).

22 comments on “A measure of justice for Nicky Hager ”