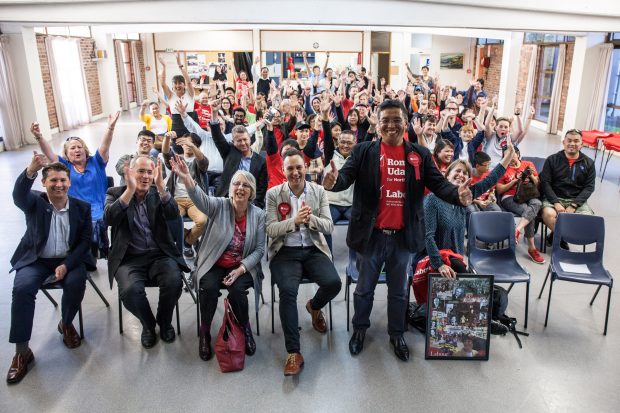 I attended the recent campaign launch of Romy Udanga who is the Labour candidate for the North Shore.  He is a phenomenally good candidate, well networked in the Philippine community and his politics are heavily related to his Catholic faith and his belief that we should all strive to achieve good and we should look after each other.

It was an inspiring event.

As you can see from the photo there were many people there.  I have been to Labour campaign launches in National strongholds where you could count the attendees on one hand and that includes the candidate.  This launch resembled the sort of launch that I would expect in Labour strongholds.

A number of people spoke.  One of them was a young man called James.  He is aged 14.  He gave a speech that to this jaundiced veteran activist reminded me why politics is so important.  And why young people are our future.

Thanks for that so yep I’m James and exactly a week ago Romy asked me to speak in front of you today. He asked me to tell you about myself and why I want to do everything I can to help Labour change the Government.

So here it goes.

My story began when I meet Jacinda Ardern in the summer of 2015 and she kindly signed me up to the Labour Youth Party, even though I was a nervous 12 year old. And from then on I was finally one step closer to achieving what I think needs to be accomplished

But for many years I just had to cheer on from the side lines and although I was invited to party events I couldn’t exactly drive to Auckland University at 6 on a Wednesday night to debate fiscal policy because I was just twelve.  I couldn’t legally drive and it was a school night so that wouldn’t have worked out anyway.

But when I went to my first Party event, the Labour and Greens joint State of the Nation speech, I was inspired because as I was standing in the middle of the crowd I realised that we could not only change the government but change the country and peoples’ lives.

So I went door knocking for the first time in the Mt Albert by-election and those two experiences just cemented my belief that we can change the country because even though I’m just 14 I know the issues and the problems in New Zealand.  But the one that gets me out of my seat every single time is child poverty

Because when my family moved here nine years ago we moved so that my brother and I could live a better life and we do.

But 295,000 kids don’t and in an amazing country like New Zealand that is fundamentally wrong.

That is the reason why I am going to do everything I can to change the government in 2017.

And I hope you will join me because my life has changed from just joining the party. Just think of what we can do if we change the government.

To every young person thinking of getting involved in Labour or the Greens can I suggest that you follow James’ example?  For all the reasons he gave we have to change the Government.