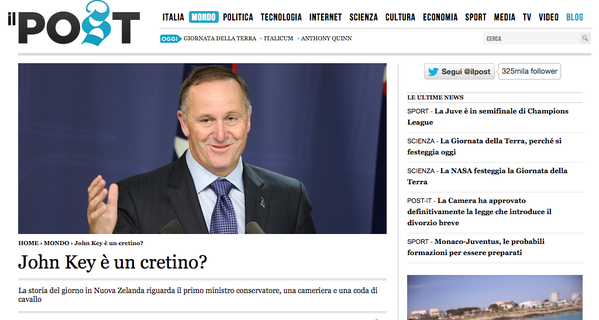 Is John Key a cretin? Fair question, but no. In the case of waitress Amanda Bailey Key’s behaviour was abusive and creepy, but he knew exactly what he was doing, he was exercising his power. In the case of all these kids, with photos and videos of Key fondling their hair, that’s just creepy as hell.

The spinoff into dirty politics at The Herald is significant to be sure – and that too has attracted international coverage in The Guardian. But the main issue is Key’s behaviour.

See the open letter from the National Council of Women. Listen to Marlyin Waring on RNZ (transcript here). Human Rights Commissioner Jackie Blue summed it up when she said “It’s never OK to touch someone without their permission. There are no exceptions” (unfortunately Minister for Women Louise Upston disgraced herself and her role). Graham McCready is laying charges under Section 62 of the Human Rights Act. Winston Peters is calling for a police investigation. Alison Mau wrote an excellent piece on blaming the victim. But the very best piece of writing (perhaps on the whole mess so far) was by Burnt Out Teacher at The Daily Blog -“I had hoped so hard I’d never know your name” – everyone should read it.

Key may actually have a genuine condition, trichophilia. If so that’s his business, but he’s got to learn to control it in public from now on. There are too many video clips cropping up of him fondling kids’ hair: The first to emerge (from this longer piece), this one from One News yesterday at 0:20 (“The boys don’t pull it do they? No. That’s good. We don’t want that to happen do we”), and a couple of examples on 3 News last night (0:20). Most of the pictures have been collected here.

Abusive and creepy. Of all the ways Key could have shot his leadership and his legacy in the foot – this really was the stupidest.

In other summaries see Bryce Edwards’ usual political roundup, and cartoons and images, and weirdest of all:

274 comments on “Abusive and creepy ”