On Sunday, Don Brash decided to muse on decriminalising cannabis. It’s not ACT policy, we’re meant to understand, it’s just the Party Leader making a speech and saying ‘this would be a good idea’. Well, I’m sorry but in what world is that not a party policy announcement? Brash is the Leader, if he gets in next term we will expect him to push for cannabis decriminalisation, therefore, it is party policy.

In classic Brash style, he hadn’t told John Banks. Shades there of when he dropped the racist Owera speech without consulting his Maori Affairs spokesperson, which ended with Georgina te Heu Heu quitting the portfolio, and when he dropped Owera 2, which ended up with him sacking the last decent female MP National has had, Katherine Rich.

Some have said that this is just Brash saying what he believes and not understanding that part of being in a party, including as Leader, is listening to others. The second part is right but don’t believe for a minute that Brash has a deeply-held belief in decriminalisation. Check your copy of Hollow Men, see how the Owera speech evolved. It wasn’t out of Brash’s strong feelings on the issue of the foreshore and seabed, it was because the Nats’ polling showed a potential wedge issue. Brash has been banging the racial division line ever since with no effect until, the other day, he had a brainwave on another potential wedge issue and went off and made his speech.

Brash, the bumbling, clueless Inspector Clouseau of New Zealand politics, has succeeded in wedging his own party after only a couple of months in the job.

So no wonder Banks gave Brash a very public smacking on the idea (watch the TV3 clip, it’s brutal). He knows decriminalisation is no vote winner in Epsom. Banks is now desperately trying to distance himself from Brash in the eyes of Epsomites, and incidentally telling real ACTiods that he isn’t one of them and doesn’t share their values. 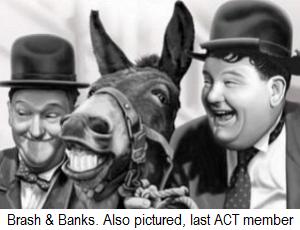 Separating Banks and Brash won’t work because the very first person that Banks would bring into Parliament with him is Brash. ACT’s whole campaign has been based on ‘vote Banks, get Brash, two for one’.

In Epsom, you’re being asked to vote a party consisting of the guy who suddenly supports decriminalising cannabis and arch-conservative who doesn’t; a party of two that works so poorly together that the deciding policy on a minor issue becomes a stand-up stoush on primetime TV.

Why would the people of Epsom vote for these two?

34 comments on “ACT, the continuing implosion ”