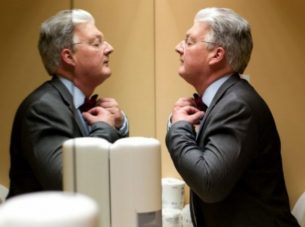 Got to hand it to Peter Dunne, he is a master of tragic comedy – PETER DUNNE: Dark, grim Labour stands alone and forlorn

The sense of optimism and enthusiasm for New Zealand that pervaded Labour previously in even the darkest of times now seems to have deserted it completely. Labour appears these days to be against everything, and for nothing.

Labour’s “we know best” attitude stands defiantly and forlornly all by itself. Labour – for so long the party of reform – is now but a hollow shadow of itself. Saddening to some, but surprising to few.

That would be Peter Dunne, sole MP of a pretend party, calling Labour “alone and forlorn”. That would be Labour, in formal cooperation with The Greens, as a bloc polling equal to the Nats, and solidly a contender to lead the next government.

Didn’t really think that one through did you Peter. Enjoy your retirement old chap.

20 comments on “Alone and forlorn ”