That nice man, Mr Key, the one who says the old Left/Right divide is over, that he’s a new man with a new (ambitious) vision for New Zealand has rolled out an unprecedented and exciting policy today: beneficiary bashing.

At present, we have a world-leading benefit system. By investing in staff, WINZ has become more than a cheque-issuing service, it actively helps people into training and into work when those are appropriate choices given individual circumstances – the results speak for themselves. National will abolish that and instead (in a move one could almost term ‘Nanny State’) implement a one-size-fits-all programme, requiring all people on the DPB to enter work or training training once their youngest child reaches 6. A couple of issues off the top of my head: the DPB gives women the freedom to leave abusive situations – they can have the money and time to raise their children alone, National’s policy will be a barrier to that if the children are over 6; a person on the DPB doesn’t necessarily need skills training; DPB numbers are falling from 113,000 in 1998 to 96,000 today; 60% of DPB recipients are caring for a child under 6; many recipients are already in skills training or work (20% have some income on top of their DPB) . 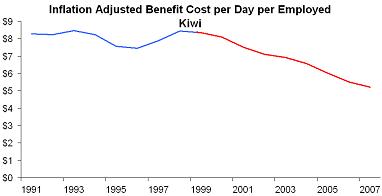 Now, even if you do think there are legions of women who are bludgers and would rather raise a kid on $250 a week than work, there’s the rather serious problem that National’s previous attempts at beneficiary bashing have done nothing to reduce benefit numbers and expenditure. (sources: RBNZ, Stats, MSD) 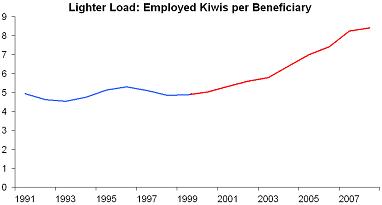 It’s important to remember, this policy isn’t really about making a better benefit system, it’s about whipping up anti-beneficiary sentiment (‘if it weren’t for them, I could have bigger tax cuts!’) to get votes. Like all National’s policy, at least the stuff it has made public, this beneficiary bashing is an election strategy, not a governing strategy.

[PS. It was only a matter of time before some unimaginative hack referred to the secret agenda recording as ‘recorder-gate’ or ‘cocktail-gate’. Tracy Watkins didn’t disappoint, any more than usual.]

40 comments on “Ambitious for beneficiary-bashing ”