An addicted technophobe; a politician

Apparently, President Obama has delivered a speech ‘ranting’ against technology. The opinion in The Economist is worth a  read just for the joy of reading the hilarity between the lines. 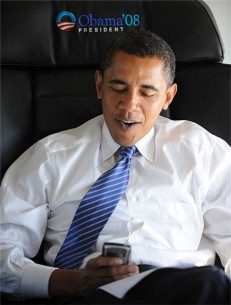 ‘WITH iPods and iPads and Xboxes and PlayStationsâ€”none of which I know how to workâ€”information becomes a distraction, a diversion, a form of entertainment, rather than a tool of empowerment.’ In a speech to students at Hampton University on May 9th, Mr Obama did not just name-check some big brands; he also joined a long tradition of grumbling about new technologies and new forms of media.

As The Economist opinion points out, this is a hilarious when you put it in the context of Obama’s quite evident total addiction to his Blackberry. This is the device that he refused to let his own security to remove from him as being insecure.

The opinion carries on with a long list of similar pronouncements from figure in the past about various communications technologies.

Umm, yeah right – I can see all of those and many other similar pronouncements in the past have happened. Sure there have been changes in the way we do things, but the sky still hasn’t fallen in when people have better means to communicate.

Mr Obama is, at least, bang up to date with his reference to the iPad, which now joins the illustrious list of technologies to have been denounced by politicians, and with his grumbling about the crazy theories circulated by the combination of blogs and talk radio. But such Luddism is particularly curious in Mr Obama’s case, given that he is surgically attached to his BlackBerry, his presidential campaign made exemplary use of the internet, and he has used YouTube to great effect to deliver his message directly to viewers, circumventing the mainstream media in the process. Presumably all those are examples of good information (the empowering sort) rather than bad (the distracting or misleading sort).

Yeah right. I can understand the loon factors on the blogs, as I see them every day (or if I read comments at the sewer) . But like all new tech, you get a burst of the crazies for a while and then it will either go under (usenet) , become an enclave that we place the seriously crazed into (talkback radio), or get moderated and tend towards rationality (where some of us are trying to push blogs towards at present).

However I’ve been around or observed politicians for quite a while. They’re (by my standards) total technophobes, in that they avoid just getting into technology for the sheer sake of it. Watching them learning to use technology is an exercise in pain

At the same time they inordinately addicted (by the standards of any normal human) to the technologies that they have painfully learnt to drive. It doesn’t matter if it is fax machines, antique brick phones, or these days those bloody awful blackberries that parliamentary services likes – the politicians can’t bear to have them out of their sight for long.

I haven’t tried this, but I expect that if you want to torment a politician, and you have their cell number – text them while they’re deep in conversation with a constituent. I’d expect the look of polite agony as they’re torn between two addictions could be sadistically entertaining 😈

12 comments on “An addicted technophobe; a politician ”