Anat Shenker-Osorio on the creation of left metaphors 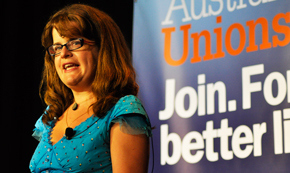 There was an interesting interview this morning on Q&A.  Communications expert Anat Shenker-Osorio was interviewed about left communication with the electorate.  She spoke about public debate concerning politics and the best way parties of the left and trade unions should communicate with the public.  Video of the interview is here.

On the TPP she noted that the word “sold” was well chosen and the TPP had been sold to us on the basis that we are consumers, not people.  The only interests recognised are commercial ones.

For unions she proposed that it should be emphaised that they are not somewhat dated third parties but a collection of people.

One of the most powerful metaphors we are seeing right now in the US and we have been testing it a bit in Australia where I am living now is the notion of imbalance and of an economy completely and totally out of balance.

When you contrast that with a kind of amorphous thing, a concept that you could not really draw as in a shape or a way such as a quality, [but] when you talk about too much wealth in too few hands and the economy rigged in the favour of a handful of wealthy and well connected people then people understand people coming together in union as the only possible countervailing force against that much power.

She was asked what works for voters and said this:

What works is the metaphor of balance and the notion of the economy off kilter and out of control and unstable.  People are really hungry … for economic stability, more even than economic opportunity.

And she had this advice for Labour.

The right wing plays that game by saying “We love the economy best and the way you make sweet love to the economy is by giving rich people even more money. The economy will be happy and it will shower goodness and GDP growth upon us.”

And our side says “We love the economy best. The way to make sweet love to the economy is by only beating workers every other day.” I am joking but not by much.

The truth is that despite all of the reality that more progressive administrations the world over actually govern under greater economic conditions. We see that everywhere there is tons of economic evidence.

[But] evidence means nothing. The “we love the economy” brand isn’t our brand.  We have a better brand.

Her key message for Labour winning is

… to come back to a focus on what New Zealander’s need, what New Zealanders want. And … to paint a bright future and stop portraying yourselves as the losing team and speaking about everything as a disaster and as the Titanic.

People are sick and tired of being sick and tired. And if you keep having your leading message being “we are losing we have lost, we lost again our opposition is so strong, they are so powerful”.  No body wants to be on that team.

Kiwis understand that and they are always going to pick a brighter future over a dirtier less equal unfair society.

Her comments certainly deserve consideration even if you do not agree with all of them.

If you want a flavour of her approach to politics and her scathing critique of the current infatuation of some with “middle ground” or “third way” politics then the video below provides this. Basically her message is that the left should engage the base, persuade the middle rather than cater to them and if it is not alienating the right it is not doing things properly.

Stephanie Rodgers has further videos up at Boots Theory.