Man, if that guy was any more up beat, he would be speedcore. Well, here’s a couple of numbers that might sober Mr Smile and Wave:

If you want to see a real recovery, look at Japan. In Christchurch’s Red Zone, you can still see plates of food, abandoned in February.

Who remembers when those idiot rightwing economists were talking about the quakes as an economic boon? 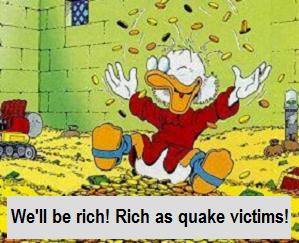 54 comments on “Another ‘aggressive recovery’? ”