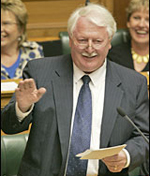 It would appear David Farrar is deeply concerned about the amount of traffic his mate Bill has been drumming up for The Standard this week, judging by his strange attack on our site this evening over a trifling error in our earlier post on Bob Clarkson.

The article in question was a repost of an earlier list of Clarkson’s complete statements in the house since August last year, which consisted of as few as nineteen barely coherent words.

Apparently there have been a few developments since that list was first published. According to DPF, Bob has since made speeches on the Mauao Historic Reserve Vesting Bill and the Building Amendment Bills, and has asked one oral question on tin-based timber treatment.

Some would call this an act of great pedantry on Farrar’s part, others that he’s simply trying to wind up his rabid horde of angry bigots, but we’re willing to give him the benefit of the doubt on this one. Clearly David is just keen to see Clarkson properly remembered for his achievements, a sentiment we can only welcome. So let us not forget Clarkson’s other notable contributions to New Zealand’s political discourse, which include:

* His description of public displays of homosexuality as being akin to “picking your nose” in public, and

* His alleged insistence on talking to an employee about his left testicle. When asked to explain the incident to a reporter, Clarkson “amazingly, said to me ‘I’m having to stand up, my crotch is so sore’, and actually grabbed his crotch.”

In light of this evidence we are naturally prepared to provide a full apology to David Farrar and the fine people in the comments section of Kiwiblog for our careless slight on Clarkson’s competence. Surely a statesmen of Bob’s stature comes but once in a generation, at least, in the New Zealand National Party, that is.

109 comments on “Apologies for Burqa Bob ”