Are the left really angry? 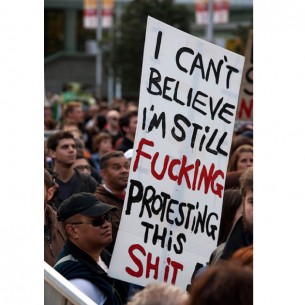 The latest right wing meme is that angry left activists cost Labour the English Election as well as the last local election and if only they were more moderate and reasonable everything would have been fine.  This analysis of course ignores completely the result in Scotland where the feisty angry nationalists who opposed the wasting of money on the renewal of Trident and the imposition of austerity to further hurt the poor failed miserably in only winning 56 out of 59 seats.  And if they chose to look elsewhere then clearly Greece, where an upstart left party won power, or Spain where something similar may happen, provide evidence of ordinary people deciding to turn to the left.

The usual suspects have engaged in this schoolyard quality attack.  Matthew Hooton, Cameron Slater, David Farrar,  Bob Jones and Mike Hosking have all trotted out the argument that Labour’s activists are a hindrance and not an asset.

Hooton and Slater have based this conclusion on the basis of a single UK blog post where self proclaimed former Labour voter said he was changing over to UKIP because some Labour supporters are angry.  The Angry Andy meme that John Key is trying to create is not accidental.

The article trots out the usual attack lines.  Labour in the UK was described as not being sufficiently aspirational, of being more interested in gender quotas, championing feminism and trying their best to not offend the LBGT and Muslim communities.  As if all of these are bad things.

The writer, Martin Daubney,was for a long time the editor of Loaded Magazine, a formerly popular “lads” magazine.  In the past he has railed against feminists and immigrants and does not like paying tax.  In his fertile imagination Labour is not interested in whites, heterosexuals or men.  And all Labour supporters are bullies.  Obviously he has not heard of Dirty Politics.  It seems that he has moved away from Labour because it is not misoginist enough.

The rather strange aspect of his writing is that apart from dissing feminists and complaining about taxes and immigration policy is not discussed.  You really get the feeling his decision about his politics involves a mean spirited self reappraisal where his personal interests are paramount and his various dislikes have been converted into a decision about his political allegiance.

The sad thing about these attacks are that they represent nothing new.  The left have always thought that injustice has to be addressed.  The right have used a variety of techniques (communists! feminists!) to attack these ideas without ever addressing the actual merits of the argument or questioning where the status quo is actually appropriate.

And like it or not there are many things people should be angry about.  For instance why our world is doing precious little about climate change despite the science being clear and the remedies attainable.  Or why in a land of plenty a quarter of a million kiwi kids live in poverty.  Or why there is a never-ending flow of wealth from the poor to the rich.

To finish off I had a look through and found a couple of historical examples of “hate filled lefty speech” which “turned off average voters” and ensured conservative success at the polls although history has clearly shown that these stands and campaigns were actually right.

For instance this dude who was clearly angry and racism in America.

And these artists who were clearly angry at apartheid in South Africa.

52 comments on “Are the left really angry? ”