Asset sales will only happen if Peter Dunne votes for them. It is his choice whether we keep our strategic assets, or lose control of them forever. So, constituents in Dunne’s electorate of Ohariu have established the Citizens’ Select Committee to hear the arguments that the Government will not and a report to Parliament. Make your submission.
——————————————————————-

On Saturday the 18th protesters tied ribbons and balloons to every power pole between Ohariu MP Peter Dunne’s Johnsonville electorate office and Parliament. This was the first step in a ‘People’s Power’ campaign in the Ohariu electorate to challenge Peter Dunne’s support of the National Government’s partial state asset sales by setting up a Citizens’ Select Committee. Since Peter Dunne’s single vote may decide the outcome of the asset sales debate his constituency, and other members of the public, need to be given a forum through which they can have their voices heard.

On the 1st of March a public meeting at the Johnsonville Community Centre, at 7:45pm. NZ Council of Trade Unions economist Bill Rosenberg will be making a presentation on the sale of state assets and the implications of free trade and investment agreements like the Trans Pacific Partnership Agreement (TPPA). Peter Dunne will be invited to attend the public meeting. This public meeting will appoint the committee members, who will then be calling for public submissions on asset sales and the TPPA. Last year the Government refused a request to hold a Parliamentary Select Committee on the TPPA.

“We have heard the strong opposition to asset sales in the Ohariu electorate”, says John Maynard. “Democracy is not just voting every three years and ours is only one example of the campaigns building in opposition to the selling off of state assets. We are encouraging local voters to support any of the campaigns and we will also be assisting those who may want to make written or oral submissions to the Ohariu Citizens’ Select Committee”.

Written submissions of only a few sentences or up to 1000 words can be made anytime before 22 March to:

In its partial privatisation programme, the Government wants to sell 49% of four electric power companies. However the Government’s stated policy of keeping 51% of the power company shares in Government ownership may be severely undermined by the current secret negotiations of the Trans Pacific Partnership Agreement (TPPA) and possibly the provisions of future free trade and investment agreements.

Both Auckland Law Professor Jane Kelsey and New Zealand Council of Trade Unions economist Bill Rosenberg have written and spoken widely about the problems of the sale of state assets and TPPA and its provisons. One provision of particular concern is the proposed investor/government disputes process – the ability of foreign corporations to sue the New Zealand Government about any New Zealand government action such as a law or administrative decision which may affect their profitability or asset values. Any challenge to New Zealand’s law- making sovereignty will take place in a secretive international tribunal and not in a New Zealand Court.

The United States push for the TPPA to have greater control over State Owned Enterprises may hamstring the activities of SOEs and reduce the benefits New Zealanders receive from state assets.

Any decision among the nine countries which are party to the secret negotiations to settle a TPPA does not require a vote in the New Zealand Parliament or even a Parliamentary Select Committee hearing to become binding on the citizens of New Zealand. It is a Cabinet decision.

Last year the Government refused a request from a number of national organisations for a Parliamentary Select Committee hearing on the TPPA.

The Ohariu Citizens’ Select Commiittee will give a voice to those who wish to make submissions on either or both the sale of state assets and the TPPA. To encourage submissions and to assist the Select Committee’s deliberations written submissions will be invited to be anything from one or two paragraphs up to 1,000 words.

The Ohariu Citizens’ Select Committee is also a process to try to bring a democratic decision making process closer to the people.

I can only assume that Charles Chauvel will help to pile the pressure on Dunne by sending a letter to everyone in the electorate with a freepost return address of Peter Dunne’s office, inviting his voters to tell him what they think of asset sales. 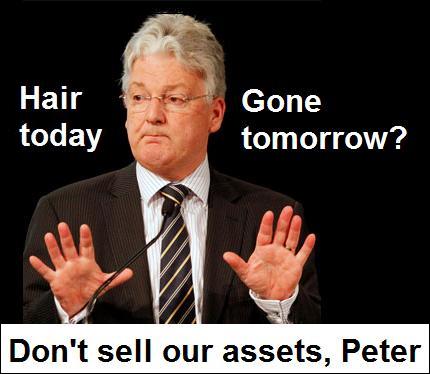