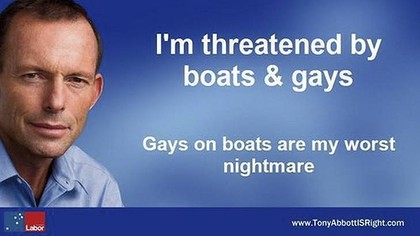 Australia heads to the polling booths today.  The polls suggest that a change in Government is not only inevitable but that many Labor MPs may lose their seats.  There is even the suggestion that Kevin Rudd may not make it back into Parliament.

Late polls suggests that after distribution of preferences the Liberal Coalition will have 54% of votes and Labor 46% of votes.  This could result in the ALP having as few as 50 seats in the 150 seat House of Representatives.  Labor is polling as low at 33% of the primary vote but with the Greens at a respectable 10% and most of their preferences expected to head Labor’s way Labour’s preferential vote should be in the mid to high 40s.  But given the nature of Australia’s election system this could result in a landslide victory to the Liberal National Coalition.

Labor stalwarts will be hoping that Kevin Rudd can repeat the success of Paul Keating in 1993 when he won the unwinnable election. Despite Labor being written off at the time Keating somehow overcame what appeared to be hopeless odds to win.  A six percent deficit two weeks out was turned into a narrow majority for Labor after all the votes were counted.

Keating’s election night speech is one for the ages.  He put the win down to Labor’s appeal to the decency in Australians, their refusal for Australia to be divided and to the hard work of the party and described the win as “the sweetest victory of all”.

Keating’s success was helped by the good will extended by progressives to a leader who was brave and willing to speak his mind.  In his Redfern Speech the year before he said this about the plight of Australia’s Aboriginal people:

… [T]he starting point might be to recognise that the problem starts with us non-Aboriginal Australians.  It begins, I think, with that act of recognition.  Recognition that it was we who did the dispossessing.  We took the traditional lands and smashed the traditional way of life. We brought the diseases. The alcohol.  We committed the murders.  We took the children from their mothers.  We practised discrimination and exclusion.  It was our ignorance and our prejudice.  And our failure to imagine these things being done to us.  With some noble exceptions, we failed to make the most basic human response and enter into their hearts and minds.

Unlike Kevin Rudd, Keating has also been scathing about the way that the refugee issue has been handled.  He is reported as saying last year that there were “racial undertones” to the debate.

I often used to say as prime minister, when they were handing out continents, not many people got one, but we did and there’s only 20 million of us.  And yet we’re complaining about 6000 people coming by boat and we want to push all of them away.

Mr Keating also said Australians demonstrated no “generosity of spirit” when it came to asylum-seekers.

His attitude should be contrasted to that of Kevin Rudd’s who recently advocated a policy about refugees that was so bad that Tony Abbott thought it was promising.  Keating’s bravery, at least concerning issues of race is in stark contrast to Rudd’s focus group inspired cowardice.  Because there is nothing to enthuse progressives in Australia I doubt that Rudd will be able to emulate Keating’s accomplishment.

If Rudd is bad however then Tony Abbott will be absolutely appalling.  He is already up to his Crosby Textor designed tricks.  Yesterday, the day before the election, the Coalition released its budget costings and promised what in real terms are wafer thing cuts.  This reminded me of a description of National’s campaign in Aotearoa in 2008 where their campaign was described as “not answering questions and not debating policy except when it suits them; and now, mid-election campaign, releasing “policy” that is little more than publicity stunts and too late for proper scrutiny”.  I wonder if National and the Coalition have the same advisors?

For all of Rudd’s faults he is not in the same league of terror inducing as Tony Abbott.  The coalition will cause a great deal of damage.  For instance their climate change policies are a joke.  As described by George Monbiot:

His views have changed, but don’t expect Tony Abbott to acknowledge this, let alone apologise to Australians for misleading them. In 2009 he maintained that manmade climate change is “absolute crap”. Now he says “I think that climate change is real, humanity makes a contribution.” But he has merely switched from denying global warming to denying the need to act on it.

Abbott is following a familiar script – the 4 Ds of climate change inaction promoted by fossil fuel lovers the world over. Deny, then defer, then delay, then despair.

His Direct Action program for reducing emissions is incapable of delivering the cuts it promises, absurdly underfunded and surrounded by a swarm of unanswered questions. Were it to become big enough to meet its promises, it would be far more expensive than a comparable carbon trading scheme, which Abbott has falsely claimed would incur “almost unimaginable” costs. But it won’t be big enough, because he refuses to set aside the money it requires. Direct Action is a program designed to create a semblance of policy, in the certain knowledge that it will fail to achieve its objectives.

I seem to recall that John Key also denied the existence of climate change but then accepted that it was occurring but effectively gutted the ETS so that nothing significant is happening about New Zealand’s output of greenhouse gasses.  As Monbiot says there does seem to be a similar script used by conservatives throughout the world.

After the election and presuming things go the way they appear to be going then the Labor Party will need to have good think about things and work out what went wrong.  And it will need to work out how to respect its proud history while remaining relevant to voters and at the same time adhering to its core values and refusing to travel along the dead ends that focus group politics entails. [Edit did a quick tidy up of this]