Russel Norman put a dagger into John Key yesterday in question time asking whether a series of national and international economic authorities really wanted to “put a dagger through the heart of growth” with a CGT.

Key waffled and whined and contradicted himself: ‘it won’t raise any money’, ‘it’s a tax grab’, ‘it’ll send the economy backwards’, ‘everyone will avoid it’, ‘it’s hideously complex’, ‘we already have one’, ‘it won’t solve the problem’, ‘we already basically did this and fixed the problem’.

But the best moment was when Norman looked at the evidence across the Tasman.

Dr Russel Norman: Has the Prime Minister seen the evidence that the Australian economy has outperformed the New Zealand economy every year since 1985, the same year that Australia first introduced a capital gains tax, which would supposedly put a dagger through the economy?

Rt Hon JOHN KEY: There are many differences between the New Zealand and Australian economies…. (followed by over a minute of increasingly hysterical non sequiturs)

So, is Norman right? Not precisely, New Zealand grew faster than Australia a couple of times,  but the Australian economy vastly outstripped New Zealand’s overall, growing 58% per capita since 1985 compared to New Zealand’s 28%. It was after CGT was introduced there, and the neoliberal reforms took hold here, that the gap really opened up.

And it’s clear that did not go “screaming backwards” when CGT was introduced, as Key would have you believe: 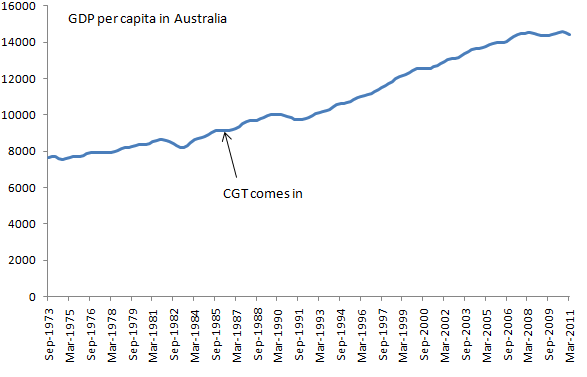 Australia’s growth per capita has averaged 0.5% per quarter since CGT came in compared to 0.4% before had as far back as records go.

I don’t know about you, but if CGT is a dagger through the heart, I would prefer it to slow starvation via neglect from Key and co.