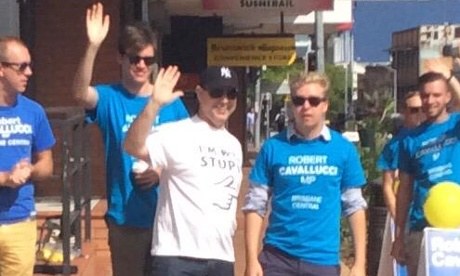 On this day when the world defiantly stands up for freedom of speech a political activist has been arrested in Australia for wearing a t-shirt that says “I’m with Stupid”.

The operator of a Twitter account parodying the Queensland premier, Campbell Newman, has been charged with public nuisance after he stood next to Liberal National party campaigners in Brisbane wearing an “I’m with stupid” T-shirt.

Iain Fogerty’s arrest, which took place at a Fortitude Valley intersection where LNP and Labor campaign teams had lined up in opposition, was blasted by Labor senator Claire Moore as “just ridiculous”.

Fogerty was released on watch-house bail and is due to appear in the Brisbane magistrates court on 4 February.

He told Guardian Australia he was still seeking legal advice, but declined to comment further.

A police spokesman said a 44-year-old man had been charged with public nuisance but declined to elaborate.

The Australian right and the Police need to get a sense of humour as well as an understanding of what freedom of speech means.  And they should not have someone arrested just because they do not like what he is saying.