Backwards to the future? 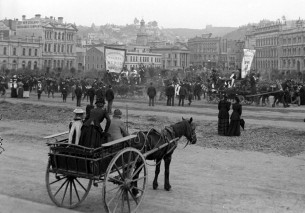 Yet this Labour Weekend kicks off with news that Kiwis (on average) work longer hours (above 50 hours per week) than the OEDC average.  Times have certainly changed since 1840. Not only are there some old and new struggles for working men AND women, but all low income people, especially beneficiaries, are under attack from our current government. At a time when jobs are scarce, there is increasing pressure to be employed.

It is a positive move that Labour, the Greens and NZ First are uniting in an inquiry into the crisis in manufacturing, which includes looking to increase the numbers of jobs (now includes Mana). But David Shearer’s focus on the nobility of paid work implicitly undermines those unable to get work, for whatever reason.

As well as the focus on the crisis in jobs, there is a need to pay equal attention to the way responsibility for welfare and community well-being is being shifted from the state to the voluntary sector. This can be seen with Campbell Live’s well -intentioned focus on food for children in schools. His programme last Thursday, on a community initiative to provide free lunches to a Northland school, was moving. The efforts of the volunteers in the local community are inspiring.

However, the downside of this is that such unpaid wirk becomes the norm, and primary target for action. It is no coincidence that, on the Campbell Live report, while some of the volunteers in the kitchen were men, this unpaid wirk was done mostly by women – and one was a young woman who said she’s currently unemployed.  She felt it was a good use of her time to contribute something to the community. Ultimately this wirk benefits the community, the country and the economy. As well as campaining for more jobs and policies to improve the economy, Labour and the Greens, need to take the lead from Mana that is campaigning strongly around the range of policies that impact on all low income people.  The way we are headed, more of the necessary wirk that benefits society will be done for little or no payment, and largely by (increasingly unemployed?) women.

At the same time, it is interesting to note the aftermath of Julia Giallard’s widely reported speech on misogyny, Al Jazeera did a report on the debate generated in Australia, while also noting that Australia is at the lowly position of 23rd on the World Economic Forum’s 2011 Global Gender Gap rankings.

Actually the WEF report says 23rd is a relatively high ranking. NZ does better retaining its position at 6th. The rankings are derived from calculations using separate rankings for the gender gaps in Economic Participation and Opportunity (NZ is 11th); Educational attainment (NZ 1st equal with many countries); Political empowerment (NZ 8th; Aussie 38th); and Health and Survival (a real shocker, NZ is 92nd).

NZ has done well to decrease the gender gap in political empowerment in recent years. Currently there seems to be a bit of a backlash against this. The NAct government is dominated by men in the most powerful positions, while it has brought in many policies that  are bad for large numbers of women.  The opposition parties also seem to be currently seem to have predominantly men in the most powerful roles.

Labour Day celebrates, what was at the time, a cutting edge victory for working people.  But the struggles continue for men and women. We need to learn from the past, not repeat the worst parts of it.

Added link to explanation about the image.

50 comments on “Backwards to the future? ”