I have spent the better part of 17 years  – eight  of those as a paid organiser for the Labour Party – practicing the ancient art of alchemy; turning supporters into volunteers, volunteers into members and members into activists.  I have recruited hundreds of union and Labour Party members. I have mentored and trained, supported and loved, nagged and inspired, motivated and enthused thousands of people over the years. I know what empowers us and what makes us invent excuses to stay at home despite the desperate emails and group texts designed to ‘activate the networks’.

I make this point because I am deeply concerned about what’s going on with some members of the Labour caucus and the long term effects their behaviour  will have on Party members and supporters leading into the 2014 general election.

The latest revelation that two senior MP had a bitch session with Duncan Garner ( good post here about some  other questions we’d like to ask Duncan) about David Cunliffe is the last straw for me. I’ve not taken sides in this debate (I was happy with either David for leader)  and I’ve tried not to pass judgement on my erstwhile comrades – I have a real appreciation of the life they live in their parliamentary gilded cages – but I’ve had, to use one of Helen Clark’s more visceral phrases, a gutsful of this crap.

I can only hope David Shearer was misquoted on Newstalk ZB when asked if he was happy with the behaviour of his caucus.  Labour Partymembers deserve better.

MPs  just can’t  indulge in this sort of disloyal, backstabbing, bitchy and  frankly unkind behaviour .  It will affect supporters and activists (not to mention the general voting public).

And just in case this is too cryptic,  here are the simple rules of volunteerism:

How to get people to do stuff:

b)  be inclusive not exclusive

d)   love them up, be kind and grateful,  say thank you often

How to piss off your activists and ensure that your volunteer base is depleted:

b)  be disrespectful of a fellow MP; especially one whom many Party members wanted as their leader

c)  act like your behaviour won’t ultimately affect the hundreds of thousands of New Zealanders who look to a Labour led government for inspiration, leadership and practical help and support in a scary world. 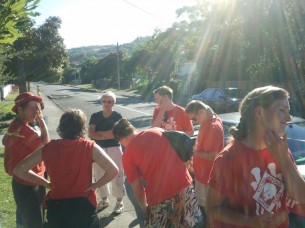 Labour, get it together.

You’re letting us all down.