Banks lays down with dogs, Brown comes up smelling of roses

It’s been interesting to watch the Nats’ smear machine switch focus from Len Brown to Andrew Williams in recent days. I guess that’s what you get for letting Cameron Slater become your de facto chief strategist. Slater is taking on Williams for a supercity seat, so he wants to target Williams when the only foe that should matter for the Right is Brown.

Certainly, this article in the Herald and the accompanying cartoon won’t help Banks one iota: 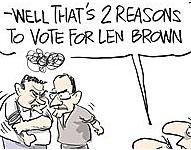 “For a moment there I thought there would be mayoral fisticuffs,” said mayoral contender Simon Prast, who said he saw Mr Williams leap from his pew and come within millimetres of Mr Banks.

“It was petty, personal and unbecoming of the office we are all aspiring to,” Mr Prast said.

Several witnesses to Wednesday night’s confrontation said Mr Banks was taking a question from the floor when Mr Williams interjected, telling him to “stop lying”.

“It was extremely childish. There were no punches or anything physical involved other than the two were right in each other’s face.

“It was like two cocks in a cock fight.”

Mayoral candidate Penny Bright said it was a disgraceful display by Mr Banks and his National Party supporters.

So, Banks and Slater’s team of little rich boys in ill-fitting suits manages to make Brown look good. Nice one.

15 comments on “Banks lays down with dogs, Brown comes up smelling of roses ”