John Banks has announced that he will stand in Epsom again at the next election. That is, of course, always assuming that he doesn’t get chucked out of Parliament first: 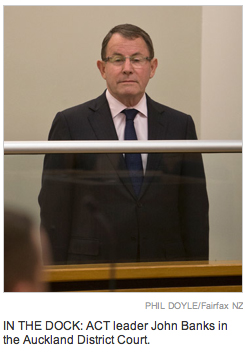 Banks faces a charge of filing a false electoral return following his failed 2010 bid for the Auckland City mayoralty.

In court today [last Wednesday], Banks’ lawyer, David Jones QC indicated his client would defend the charge because the prosecution was flawed.

Banks was forced to stand in the dock during proceedings and was not allowed to formally enter his not-guilty plea to the charge until a plea inquiry hearing on May 30.

I wonder if Key will extend Banks a symbolic cup of tea this time. I wonder if the good burghers of Epsom can stomach voting for him again if Key does. Probably, and probably – I don’t see any of the parties involved suddenly growing scruples. Or on the other hand, maybe this image of Banks in the dock will finally finish off the shambling remains of ACT. Better late than never.

28 comments on “Banks to stand again ”