Bill English: making it up as he goes along

Bill English drew astonished laughs from the House today as he claimed that wages had risen just 3% after inflation during Laobur’s years in office and then admitted that he hadn’t checked his un-named sources’ information.

Here’s the man you pay quarter of a million dollars a year to be Minister of Finance (speaking on behalf of the PM, who couldn’t be arsed showing up to Question Time):

Chris Tremain: What reports has the Minister seen on real wage growth over the past decade?

Hon BILL ENGLISH: I have seen a report that was so incredible that it was hard to believe. It stated that in the 9 years that Labour was in power, real after-tax wages rose by 3 percent in 9 years. I found that number incredible, and we are going to check it.*

English’s fictional source is wrong. He is wrong. Real (ie inflation-adjusted) wages rose far more than that under Labour (and Labour didn’t raise any income tax apart from the introduction of the 39% bracket which only affected a small number – tax as a % of GDP was steady under Labour).

Unlike English, I can back up my claim that wages grew by more than 3% under Labour with real facts, and you can play along at home because all this data is freely available on Statistics New Zealand’s Infoshare.

Now, there’s a number of Statistics series that supply a figure that equates to ‘the average wage’.

There’s also the annual New Zealand Income Survey which has average and median hourly and weekly incomes from wages and salaries – this has the advantage over the QEX of counting all wage and salary income, not just that of employees.

Or, and this is my favourite because it doesn’t get distorted by changes in unemployment, you can take total gross earnings for all employees from the QEX and divide by the size of the working age population from the Household Labour-force Survey.

I’ve taken the figures from each of these sources for the quarter before Labour entered power – 1999 Q3 – and the quarter before it left power – 2008 Q3 – and adjusted them for inflation by dividing the figure by the consumer price index number for those respective quarters (835 and 1077), then multiplying by 1100 – the current CPI.

And here are the results:

Hmm. So during Labour’s time in power, wages grew by 7-16% after inflation, depending on how you measure them. And if the question is: how much did wages per working-age person grow after inflation? The answer is a very impressive 16.2%.

But English wasn’t done with making shit up yet. He then when on to claim that Labour had made New Zealand’s international debt spiral out of control. Fortunately, this too is a fact we can check simply by going to the Statistics NZ infoshare site. And here were are, New Zealand’s net international investment position (ie how much we owe the rest of the world) as a % of GDP: 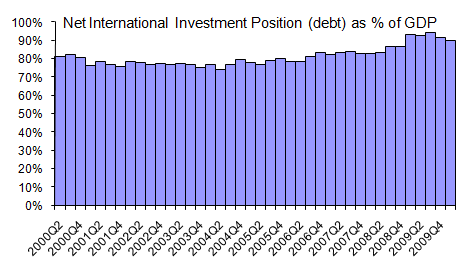 So, the truth is that New Zealand’s indebtness level actually improved during most of Labour’s term and while it had worsened slightly by the end of 2008, it was under National that it reached danger levels – due to the recession, not National policy.

We’ve got the Minister of Finance, a man responsible for a $65 billion a year budget, citing in Parliament reports from un-named sources, the veracity of which he hasn’t even checked, to make assertions that a palpably false. And even if his accusations against Labour’s record were true, he doesn’t have any solutions himself – indeed, the reason he is spending so much time trying to smear Labour’s record is he is desperate to make is own record look less appalling by comparison.

Do we laugh or cry?

28 comments on “Bill English: making it up as he goes along ”