Over the last 12 months we’ve seen Chopper Tolley, Basher Bennett, and Pansy Wong all exposed as incompetents. As Ministers, these Nats sit atop portfolios in a manner rather akin to sitting atop a portaloo. Yet, there’s another Minister who needs to be brought into focus Crusher Collins.

It seems now that ‘bash-a-cop’ is becoming a bit of a weekend sport. The reason for this, we are told, is that police no longer have the respect of the community they claim to serve and protect. Since Crusher took on the role as Minster for Police, lets have a wee look at what’s been happening with the police.

Every few weeks yet more news of the police and their antics.

Obviously, not all of the incidents have occurred during Crusher’s tenure and not all of them are specifically her fault. There are other incidents which indicate the attitude of the police to their community, ranging from high speed pursuits at the weekend and their behaviour during recent protests being of relevance. But, given this litany of fuck ups, isn’t it just a wee bit possible that the police have something to do with the lack of respect they receive from the community? Are the police actually under control? What about the stress of their job, petty government policies, the economic environment, being trained by drunks, and the culture of the organisation itself? When does one begin to look at the Minister and ask what is going on?

Are the media to blame for bringing all this to our attention, as the Police Association would have us believe? And, speaking of the media, where are the banner headlines announcing the end of society as we know it as per the sensationalist nonsense when Labour was in power? Questions, questions, questions.

And what has Collins got to say about things? Well, as of this afternoon absolutely nothing That’s right: nada, zip, zero. Missing in action.

Instead, its that nice Mr Key who’s come storming down from on high to grab the headlines and paint his image as crusader for the good cause – and what’s his solution to the situation yep, you guessed it: harsher sentences. No policies for improving the police image, no comment on the real causes, no insight into the implications for society when its guardians are subject to such violent scorn. Just more media mendacity driven by a relentless desire to say something, anything, to seize the headlines and manufacture yet more ‘oohs and aahs’ from his treasured focus groups. So much for change.

Are we lovin’ it yet?

lprent: We have commented previously on assaults on police in this post from 2008. I suspect that at best the graph will show another minor lifting per sworn police officer in 2009. Of course if the number of police are increased then you get a rise in absolute numbers, which is what is being spun in the MSM at present.

You have to wonder who is puffing figures to make a do-nothing government have a meaningless PR opportunity. I’d like to see what the rate is for traffic injuries per sworn officer – probably as at least as dangerous as assaults. 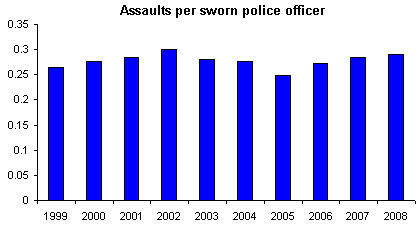