Blogs and the Political Establishment

On reflection my distain wasn’t in fact for blogs. My weekly presidents’ column was published online in a blog format, thus I was using the medium to attack the medium. My distain came from operating in Wellington, New Zealand’s capital city, where the political establishment operated in an isolated bubble. In student politics, I loved being in a position where I could be a voice for change or do good. What I despised was the irrelevant gossip and manoeuvring that inevitably follows when you are near the seat of power, ie parliament.

It wasn’t that I had a particular thin skin. Having had the record for being called a c%#t in the Salient’s letters to the editor one year, to then go on and get re-elected to the executive showed me that the (usually unanimous) comments from random dickheads mattered little. What annoyed me was the time wasted when others indulged them, or made random attention seeking idiots feature writers or gave them some other platform. If this were just student politics then fine. But I could tell then and still see today, that much of the political debate in Wellington supposedly at a national political level is little more than the gossip and nonsense of a club. This sadly, sums up much of the political journalism, social media and blogging from Wellington. 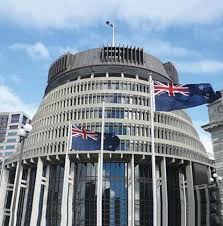 The Beehive – Wellington’s Capital, and a great big political bubble.

This is by no means unique to Wellington. I very clearly see similar such bubbles exist in London, Canberra, Washington, Paris, Ottawa and in most capital cities in democracies. And worse, people know this. They’ve known for years that politics is an elite club.

One of the reasons that the people in these clubs are still struggling to understand Trump, Brexit or even the relative rise of Corbyn and Bernie Saunders is that many people outside the bubble are sick of the bubble. In fact there are people who are quite happy to vote for extremes on either side of politics, just to wipe the smug look off people the smug establishment.

The fact is people who don’t live in the world of the political chit chat, or endlessly read the inane political blogs may view the world differently (The Standard is of course above all the others haha) . The world views of people outside the bubble are not only valid, they actually are often more informed than those in it. People in the bubble to will claim to know what is happening “on the ground.” Yet something like Brexit or the Trump election hits, and those in the bubble are shocked.

My experience during my student politics years was to be labelled mad, looney, extremist, idealistic and unrealistic. Many of those positions I took at the time such as free tertiary education are now government policy in New Zealand. Democracies work well when voters are given a genuine choices and can be part of serious debates about the future of our society. When this reverts to name calling and pettiness by those who would rather protect their position in the club, this undermines democracy.

43 comments on “Blogs and the Political Establishment ”