As MS has already noted, Deborah Russell has the best summary of the budget: 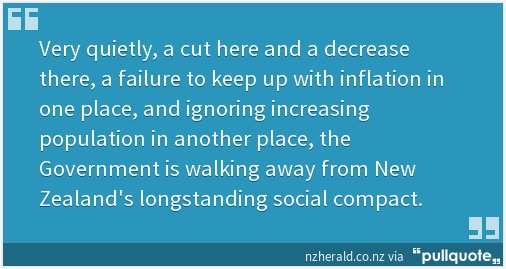 Budget 2016 – How do we look after all New Zealanders?

Very quietly, a cut here and a decrease there, a failure to keep up with inflation in one place, and ignoring increasing population in another place, the Government is walking away from New Zealand’s longstanding social compact.

In his Budget speech, Bill English proudly says that government expenditure is down to less than 30 per cent of GDP, and that’s the way that it’s going to stay. But how is this retreat from the economy achieved? It happens by spending less on health and less on education, and not spending enough on housing for the least well off New Zealanders.

Health spending is going from $15.2 billion to $15.6 billion. That’s an increase of 2.6 per cent. But inflation is predicted to run at 2 per cent, and population growth is running at around 2 per cent. In real terms, the health spend per capita is going down.

It’s the same story in education. Operating expenditure is going from $13.9 billion to $14.2 billion, a 2.2 per cent increase. That’s not enough to keep up with the growth in school rolls. …

It is irritating to see this described by some as an “education budget” when schools – for the first time ever – have been hit with a freeze on operational funding:

Parents and principals around the country will be scratching their heads wondering what on earth is going on after the Government froze school operational funding.
…
Schools are increasingly relying on donations to cover their costs – gone are the days of a free education. Schools unable to afford their own technology for students have even resorted to accepting donations from foreign buyers in exchange for land deals.

Before Finance Minister Bill English had even wrapped up his Budget speech, schools would have been brainstorming how to get parents to cough up the shortfall. It’s no wonder “surprise” and “shock” were the two most common words rolling off the tongues of those in the education sector and Opposition MPs. …

The extra funding allocated for disadvantaged kids amounts to $2 each, per week. Wheee! Speaking of kids:

Not the New Zealand we want

Child Poverty Action Group (CPAG) endorses the Government’s stated commitment to improve the lives of all vulnerable children. It has failed dismally with the 2016 Budget announcement today.

CPAG asked for meaningful policies for incomes in this budget but there is nothing in this budget for families with children. When so many New Zealand families are in crisis and children are bearing the brunt this budget does nothing. “All families need sufficient resources for their children to thrive,” says Professor Innes Asher, CPAG health and housing spokesperson.

The Government is making Auckland “uninhabitable” for young people. So say the city’s youth, who are bitterly disappointed that Thursday’s Budget contained few measures to tackle the housing crisis.

The only Budget housing announcements were a plan to release another $100 million worth of surplus Crown land in Auckland for residential development and a $258m boost to social housing.

Annaliese Johnston is a 25-year-old lawyer who believes she will never be able to own a home in Auckland. The absence of new tools on Thursday showed a lack of meaningful structural change, she said. “I have kind of resigned myself to the fact I will be a renter, potentially for a long time,” she said.

On the budget’s “rosy” economic forecasts:

But the forecasts for the economy were based on Treasury assumptions, which quickly came under question, including the expectation of a strong rise in dairy prices over the next two years [yeah right]. Westpac chief economist Dominick Stephens was skeptical about the forecasts. “The Treasury’s forecast of large surpluses through to the end of the decade seem unrealistically optimistic to us.”

For a good summary see Grant Robertson: A Budget that lacks vision and courage to make life better.

As always Scoop has a comprehensive list of links to analysis and reaction. Go Scoop!

Effective cuts in health and education, nothing substantial to address the housing crisis, nothing addressing poverty, nothing on climate change. What a steaming load of fail.