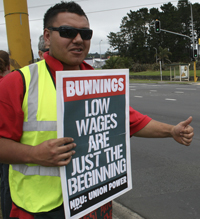 While media, politicians and the Kiwi blogosphere are arguing about the wage gap with Australia, around four hundred NDU members at Bunnings Warehouse are taking matters into their own hands with a two-hour nationwide strike action today.

Bunnings workers in New Zealand start on just $12 an hour compared to $19 for their counterparts in Australia. This is from a company that could afford to give its Australian CEO a raise of 61% recently, bringing his salary up to more than $6 million or, in an ordinary wage earner’s terms, $2,885 an hour.

It also brings some context to the wages debate. No amount of tax cuts will give these workers the $7 pay rise they’d get from moving across the ditch, and to pretend that’s the case is just dishonest.

These workers have unionised themselves in an industry that had the guts torn out of it by the Employment Contracts Act and are standing together to fight for decent wages. They deserve our full support.

You can help by calling your local Bunnings store manager on 0800 HARDWARE or by emailing Bunnings New Zealand’s General Manager at [email protected]. Tell them to get back to the table and pay their workers properly.