For some completely unknown and inexplicable reason, California is in the grips of a massive drought:

The governor of California has ordered unprecedented and mandatory water restrictions in the state as officials conducted a regular measurement of the Sierra Nevada snowpack and found “no snow whatsoever” amid the state’s ongoing drought.

“This was the first time in 75 years of early-April measurements at the Phillips snow course that no snow was found there,” the California Department of Water Resources said in a statement on Wednesday at the conclusion of a survey attended by the Governor Jerry Brown. It said readings from Wednesday put the state’s level of water content at just 5% of the historical average for the date.

“Today’s survey underscores the severity of California’s drought,” said DWR director Mark Cowin. “Water conservation must become a way of life during the worst drought in most Californians’ lifetimes.”

But these water restrictions are not going to be applied universally:

The April 1 snowpack assessment in California, which set an all-time record for lowest snowpack levels in the state’s history, finally spurred Governor Brown’s office to issue an executive order to residents and non-agricultural businesses to cut water use by 25 percent in the first mandatory statewide reduction in the state’s history.

But some groups have been exempted from the water restrictions, specifically big agriculture, which uses about 80 percent of California’s water, and oil companies. Democracy Now! discussed on their show today the new mandates and the implications of exempting some of the biggest water users in the state. 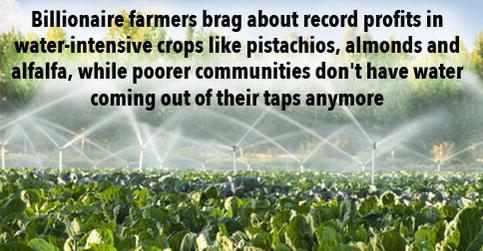