David Cameron has cancelled his planned trip to Japan and New Zealand. He is facing a backbench revolt over European Union membership at the same time as he is trying to intervene in the crucial financial summit trying to sort out problems in the Euro zone on Wednesday. True to form, his is also trying to fob off the Tory right by promising to use agreement to the bailout  as a bargaining chip to release Britain from European Union labour obligations. 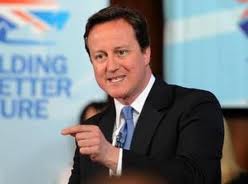 Oh well, one less photo op for John Key – wonder how he will fill his day. And I’ve seen that slogan before somewhere. The future doesn’t seem to be getting  better in Britain however.

At least we won’t have Cameron pressuring  Key to keep troops in Afghanistan. That might help save a few lives.