It looks to me like the early voting for Northland is likely to be close to or more than 50% of the total vote. Part of that is because it is a by-election. Part because of National’s hapless and tainted candidates (past and present) going against effective opponents. But also due to the strong trend to early voting. It will need to cause changes in electioneering.

Mark Osborne is the manager of a controversial ratepayer funded project that is the subject of a governance and funding review by the Far North District Council after major losses in its first two years. According to the NBR he is refusing to answer questions about it. Aren’t the voters of Northland entitled to some answers before they vote?

Is Northland getting sick of National’s panicked invasion? Will having Osborne fail to front Peters in the studio help? Could National actually lose Northland?

Mike Sabin has a prominent chin – A poem for Northland One of National’s big claims in the Northland buy election was that they had created 7500 new jobs in Northland. Lies lies lies.

Northland by election – National gets desperate

National is obviously deeply afraid of losing the Northland By Election as is clearly shown by the liberal application of pork barrel politics, the misuse of statistics, the use of Ministerial resources to help campaigning and now the bullying of a local group seeking to have a local road improved.

How much is National’s Northland panic costing the taxpayer?

So our PM is cutting short state business for the purposes of party campaigning. Since Key invented the whole silly hats game, I guess it’s fair to ask if he still gets paid as PM when he is acting in his capacity as Party Leader? If so, why? 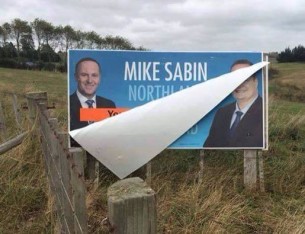 Winston Peters has challenged John Key to a debate in Northland.

Advance voting only opened on Wednesday in Northland and already double that of the general election. Unusual in a by election for there to be a big turnout, so we will see if it continue.

The Nats are now threatening Northland voters with the loss of roading projects and more. Classy.

National’s Epsom branch to back National in Northland

No need for Mr Gower to get all hot and bothered over this “dirty deal”, it’s just National’s Epsom branch backing the National candidate.

National has to win Northland (plus Armstrong’s amazing U-turn)

In which John Key denies the bleeding obvious, and John Armstrong risks whiplash with the speed of his U-turn.

The first polls in the Northland by-election are grim reading for National. It looks likely that Winston will win and National will lose their Parliamentary majority. Have the Tories snatched defeat from the jaws of victory?

I’ve been getting tired of the fantasy elections that some political commentators seem to enjoy playing. Currently the fantasises is in Northland, with the same old tiresome lines. It is a pity that most of those playing this game don’t ever seem to think about the behaviours of real voters, real candidates, and real parties.

Winston: We Will Fight Them on The Beaches of Northland!

NZ First leader Winston Peters is to stand in the Northland by-election. A three way race between NZ First, Labour and National will make for an interesting campaign and factors outside of National’s control may determine the result.

Stand by Your Man

Sometime in the next few days, Winston Peters will announce whether or not he will stand in the Northland by-election. He should run unchallenged by the left and Labour and the Greens should endorse him for the greater good.

A by-election is imminent – so how does Labour win in a safe National seat?

The Christchurch East by election

Today is the day for the Christchurch East by election.  No discussion or comments on the subject will be allowed until after voting closes at 7:00 PM.  Then knock yourselves out …

The Christchurch East by election

This Saturday the voters of Christchurch East vote for their next MP.  Labour’s hopes are pinned on Poto Williams.  But even though the seat has been Labour’s for a considerable period of time anything is possible.  And turnout will be vital.

Labour has selected Poto Williams to be its candidate for Christchurch East. I hadn’t heard of her before but a few phone calls has convinced me she’ll be a great candidate and a great MP. It’s fantastic to see a Maori woman being selected for a general roll seat in a open competition with people from a variety of backgrounds. That shows it’s a meritocratic system.

Labour yesterday announced the 6 candidates standing for selection to be the Christchurch East candidate in the impending by-election. All are locals, and there’s no Clayton Cosgrove despite early rumour-mongering. It looks a talented list.

Gotta love the reporting of the Ikaroa-Rawhiti by election. This was a boring, predictable win for Labour, a big upset win for Mana, and probably the death knell of the Maori Party.

Update: Native Affairs has unconfirmed reports that Sharples has stood down as leader of the Maori Party.

Comments on this post have now been enabled for a discussion of the outcome!

I’ve always been in favour of contested selection for parliamentary candidates. Being a Member of Parliament requires commitment, energy and above all a robust mental and physical constitution – clear values and strong bodies.When Parekura Horomia was selected in 1998 there were a little over 20 Labour party members in the electorate. This time its different. Media reports have party membership at 850, and the three selection meetings in the huge electorate attracted 180 in the Hutt, 110 in Tolaga Bay, and 430 in Napier. That’s the base from which Meka Whaitiri, Labour’s chosen candidate comes.

The Green candidate for the  Ikaroa-Rahiti by-election, Marama Davidson is someone to watch.  However, Labour’s Meka Whaitiri is the front runner and a very strong candidate.   Mana’s Te Hamua Nikora and the Maori Party’s Na Raihania also have the opportunity to make their mark.