At noon today Labour and the Greens jointly announced new energy policies. “NZ Power” is big and it’s bold. It will completely restructure the way the electricity sector is run, and result in lower power prices for both domestic and business consumers.

The Greens and Labour are planning a joint announcement on their policies on power prices. Both parties want to bring down costs of electricity.  The policies of the two parties will also have some differences.   How will it mesh with Green Party policies on sustainability?

The latest Herald Digipoll is mixed news for the left, but good news personally for David Shearer. Even John Armstrong is cautiously impressed…

Key hid his Tranzrail shares while asking questions about Tranzrail because he’s a sneaky, avaricious bastard.
Banks filed a false election return keeping his big money donors secret because he’s corrupt.
Shearer forgot to declare his UN Bank account because he’s a bit of a munter.
Time will tell which the public tolerates more.

David Shearer won’t rule-out asset buy back (at cost), and a great blog post on “Climate Change: The New Normal”

Shearer signed up for sale

On Morning Report this morning there was a clip of John Key (in Brazil) saying that David Shearer had signed up to buy shares in Mighty River Power – and he was welcome at the front of the queue like all New Zealanders. Shortly after there was a rushed response from a Labour spokesperson to […]

I know we’re meant to make do with what we have. Sometimes wonder what we would have if a couple more MPs had thought beyond themselves, given the party membership the choice. Here’s two guys. One talking Labour values, recognising injustice arises from an unjust system. The other looking at a half mil house will touting affordable housing. 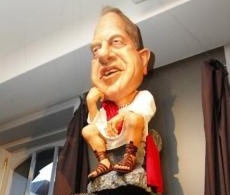 A Labour leader in Britain

I wasn’t initially impressed with Ed Miliband, but I am impressed with his success, and with his latest policies he’s re-establishing British Labour’s credentials on the left. What are the lessons for us in NZ?

David Shearer’s weekly e-newsletter, this week – on the big year ahead.

The macho posturing we’ve seen from David Shearer since conference never quite gelled with the Shearer I knew. I’d always thought of him as a nice guy out of his depth, so the public defaming of David Cunliffe and the ‘I’m in charge’ theatrics always jarred. Brian Edwards argues the confusion in the Shearer brand […]

ImperatorFish: Is National Really Hands-Off Then?

Scott examines National’s line that they aren’t “hands-off”, and finds them, if not entirely neo-liberal, still pretty dedicated to their worship of the invisible hand of the (private) market.

It was a slightly risky speech for Shearer, but the media reception has been decent. Labour will be pleased with the coverage, and especially so when compared (source by source) with John Key’s hapless effort last week.

States of it – Turei and Shearer

Metiria Turei and David Shearer have today given their State of the Planet and State of the Nation speeches respectively. There’s a lot of commonality, which is good. A critique of the government is solidifying and it’s centred on jobs, housing, and the environment. The Greens’ policy agenda looks heftier than Labour’s but both are heading the right way.

David Shearer has just made his opening speech of the year at the Labour Party Summer School.

Zetetic’s telling porkies. His talk of a rift in the Labour Party is crap. He hasn’t got a clue about  what went on the Party conference – the idea that there should be a membership-wide vote on the leadership was voted down in November by a large majority of the 600-700 delegates present.

MSM “impartiality” focuses on two sides of a very narrow and shifting “centre”.  Parliamentary Labour parties have got locked into appealing to this centre, over time shifting the caucus rightwards. Only momentum from the flax roots can break the resulting steady rightwards shift.

Shearer to put it to the vote

Word around the traps is that David Shearer is going to use his state of the nation speech next weekend to announce that he will put his leadership to full membership vote in February. If it’s true, and it’s a big if, it’s a ballsy but smart move politically and a welcome sign that Labour’s leadership is embracing democracy.

Labour’s 2012 Kiwibuild policy has focused on building homes for first time buyers.  Now we are told Labour’s 2011 policy pledging to increase the state housing stock still stands.  This raises many questions: including do-ability and the Labour leadership’s continuing (neoliberal) focus.

I’m delighted to see that over 70% of respondents to a recent Herald poll, published today, think Labour’s 100,000 houses plan is “a winner for Labour”. The plan was announced by David Shearer at Labour’s November conference. I’d also like to thank Olwyn for asking some questions about Labour’s policy on housing in response to Zetetic’s post – they deserve an answer.

I know I criticise David Shearer a lot, but if I sound bitter it’s just because I totally thought he would turn out to be Jesus.

… And even if I was wrong on that point, I went on to write, David Shearer was still not the best man for the job, because he had failed to demonstrate an ability to walk on water or bring the dead back to life. But I didn’t push the “publish” button, because I came up with an even better idea for a post…

Why the February vote could be very bad for Labour

Going on previous form, Camp Shearer seem to think a successful caucus vote in February will silence all criticism of his parliamentary leadership of the Labour Party.  Boy, are you all wrong.

Will the real David Shearer please stand up?

David Shearer was on TV 3 this morning, reflecting on his last year. He claimed that he and Labour are doing well under new and settled leadership, taking a new direction.  How accurate are his claims?

David Shearer’s weekly e-newsletter – on a year to remember. David Shearer was on fine form in this speech yesterday, rounding up the year with thanks to Parliament’s workers, greetings to the opposition “family”, a friendly dig at the Press Gallery, the year of “Partial Recall” and memory dot gone, and finally the serious business of holding the Nats to account on their appalling record. Good work.

David Shearer’s weekly e-newsletter, this week on the Auckland tornado, and the emergency response.

Individual polls are nothing to get too excited about, it is the trend over time that matters. That said, the TV1 and 3 News polls tonight were both good news for Labour and Shearer.