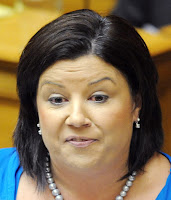 There’s a major problem with National’s policies that was highlighted in Parliament today; Youth Unemployment levels are the highest since records began and higher than in the great depression.

The dysfunctional process that has led to such a huge increase is a direct result of National’s archaic policies that have caused an extended and deeper recession and worsening social conditions including a lack of good jobs for the young.

It’s a pressing matter, especially considering the recent social disorder similar prehistoric policies have caused in Britain. Despite that violence, National is intent on going down the broken laissez faire path, which has been proven a complete failure especially for the young and impoverished.

When questioned on the fact that there’s a huge increase in Youth Unemployment since National took over, Minister for Social Development, Employment and Youth Affairs Paula Bennett made a strange statement;

“There’s really a lot to celebrate.”

FFS! There are enough young people not in employment or training to fill the new Eden Park stadium. Obviously 39,300 unemployed people between the ages of 15 to 19, is not something to celebrate, but try telling Bennett that.

Trevor Mallard was asked to leave because he called John Key a chicken btw. You might have also noticed Lockwood Smith stepping in to protect Paula Bennett when the questioning became difficult for her to answer. This is not how democracy should work, MP’s should be able to stand on their own two feet without being mollycoddled by the Speaker of the House.

By trying to spin National’s failure into something positive, Bennett has effectively mislead the house. Bennett then tried to mislead reporters by saying the increase was only for youth aged 15 to 19, when in fact there is an increase in unemployment for those aged 18 to 24 years since 2009 as well. 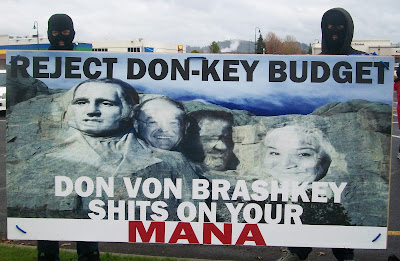 The Household Labour Force Survey put New Zealand’s unemployed youth rate at nearly 30% the highest in the OECD. This is a ticking time bomb and one that must be addressed in a timely fashion, and not just by throwing kids off welfare. That just leads to further resentment and social disintegration.

If National was addressing the problem properly, it would not have got so bad. High youth unemployment is another symptom of National’s endemic contempt for New Zealand’s young and poor. A couple of examples of that was when National removed $146 million for youth training, affecting 31,000 positions. They also made cuts for funding for higher education for sole parents, taking away the very same incentive Paula Bennett used herself to get ahead.

National is shuffling the deck and stacking it against the young. By removing funding that they themselves had the benefit of, they’re showing their only loyalty is to themselves and their rich mates. The consequences of such selfishness and hypocrisy could be disastrous.