The CIS released a report [PDF link] today entitled Ending No. 8 Wire Welfare: Why New Zealand is Lagging Behind. Its author is Luke Malpass. Predictably, from the right-wing think tank, the paper is an ideologically driven argument for a more punitive welfare system. As is so often the case, it’s premised on the tired old assertion that New Zealand’s recent approach of supporting people from welfare to work hasn’t been effective. The paper claims:

New Zealand has in fact stuck itself out on a limb in order to be all carrot and no stick… [J]udging by the reduction of numbers on the [Unemployment Benefit] over the past decade, one could easily say that this approach has broadly worked… However, unemployment numbers only tell part of the story. [The sharp decrease in those on the main UB (dole)] has, however, been counterbalanced by an increase in those on the [Invalid’s Benefit] and [Sickness Benefit].

Ah, no it hasn’t Luke. Take a look at that red line – total number of people on benefits. It has fallen almost precipitously over the last few years. 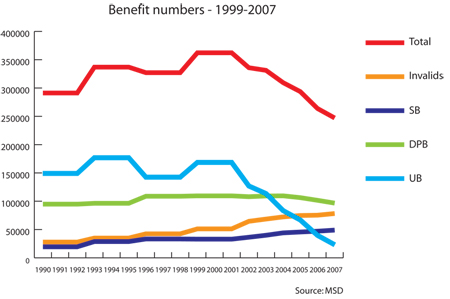 If this is the kind of policy “analysis” the CIS is doing it’s no wonder they struggle to get traction for their extreme right wing ideas.

35 comments on “Centre for Inaccurate Studies ”