Climate change – that ship has sailed

These days I am struck with a bizarre sense of unreality when I read pieces like this:

New Zealand’s top planners will be holding a think-tank on climate change impacts this week at the New Zealand Planning Institute’s (NZPI) annual conference in Dunedin which started today.

Climate Change Minister Paula Bennett will head to New York next week to sign New Zealand up to a historic climate agreement.

Mrs Bennett said the signing ceremony at the United Nations on April 22, which 130 countries will participate in, was another step towards ratifying the Paris Agreement.

There is no deadline for the ratification, which covers emissions obligations after 2020 and commits all countries to limiting global temperature rise to 1.5C this century.

Once the agreement is ratified, Mrs Bennett said, the more difficult task of moving New Zealand to a low-emissions economy would begin. … 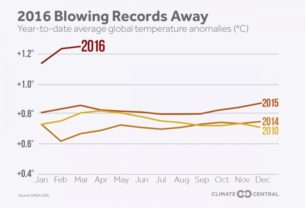 The climate ship has sailed, and like a supertanker, it has massive inertia.

If we were wise (we’re not) we would start preparing now for a very different planet.

We Just Crushed The Global Record For Hottest Start Of Any Year https://t.co/3qYXyrL9QL via @climateprogress

Past 11 months hottest in 135 yrs of record keeping, 6 months with temps >1°C above average https://t.co/8WNOxjrdYO pic.twitter.com/aSTFlhhZBX

57 comments on “Climate change – that ship has sailed ”