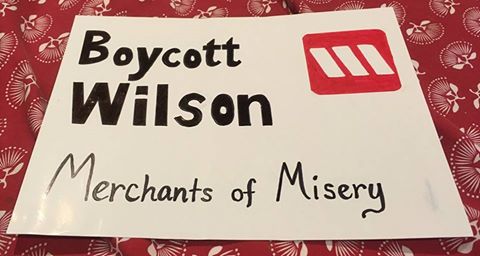 A protest is planned in Auckland today by local progressive activist Julia Schiller against Wilson Security for its continued management of the Nauru and Manus Island refugee detention centre. Wilson Security is an Australian firm and is related to Wilsons Parking in New Zealand.

In Australia a national day of action is also planned and action against the corporation has been ongoing. The action has been successful with Wilsons announcing that it will not renew its contract to manage the detention centres when the contract expires in October 2017. The Boycott Wilson group still wants to go ahead with the protest and the reasons are set out in this press release.

Wilson Security have announced that it will not be renewing its Manus and Nauru contracts.

While we welcome this news and see it as a huge step forward, we are very aware that we must maintain the pressure on both the government and on the refugee detention-industrial complex.

The fact remains that people imprisoned on Nauru and Manus Island continue to suffer daily. The Wilson and Broadspectrum contracts do not not expire until October 2017. We say that 13 months is too long to wait, especially on top of years of despair and abuse.

Wilson Security says in its statement that it is “takes pride” in its performance and has carried out its obligations to “the best of its ability’. Such a statement shows contempt for the people who have been abused and traumatised by its staff. That is why we will go ahead with our planned action this Saturday. Wilson Security must be held to full account for the human rights crimes it has committed.
We know that direct action works and we will continue to act until the camps are closed and every last person is safely resettled.

We demand that Wilson Security and Broadspectrum withdraw from the contracts now.
We further demand that the government arranges safe passage for all asylum seekers/refugees on Nauru and Manus Island who choose to resettle in Australia and that they are provided with full resettlement support.

Wilson Security, G4S and Serco must be held accountable for human rights crimes committed against asylum seekers both onshore and offshore.

Julia has set out the reasons for the local protest.

Most New Zealanders know Wilson Parking for the utterly extortionate rates they charge at their pop-up car parks and garages. However, the Wilson corporate portfolio extends into far more nefarious business than $9 an hour to park your car. You may have seen reports about the Australian Government’s deplorable detention centres set up for asylum seekers on Nauru and elsewhere. Wilson Security, another tentacle of the multinational Wilson monster, are subcontracted to run the camps and are implicated directly in human rights abuses, inhumane conditions, and cover ups.

In solidarity with a Boycott Wilson group founded by concerned Australian citizens, the Kiwi group Boycott Wilson NZ is holding a protest rally to inform citizens of this Wilson connection. We believe compassionate Kiwis will join our call for a boycott of Wilson garages. If it becomes too wounding to their bottom line, the only factor that seems to matter to such large corporations, we expect Wilson will withdraw from running the detention centres. If enough private corporations like Wilson know the citizenry of Australia and New Zealand won’t stand for them profiting from despair, the Australian government will be forced to close these unaccountable offshore camps and start processing asylum seekers in a transparent and humane way.

Boycott Wilson NZ invites concerned citizens to gather with placards for a protest rally on Saturday, September 3 from 1:00 – 3:00 pm at Lumsden Green, a public park at Broadway and Khyber Pass in Newmarket, just down the road from one of Wilson’s many parking garages.

The New Zealand Facebook page with details of the protest is here.

29 comments on “Close the camps Australia ”