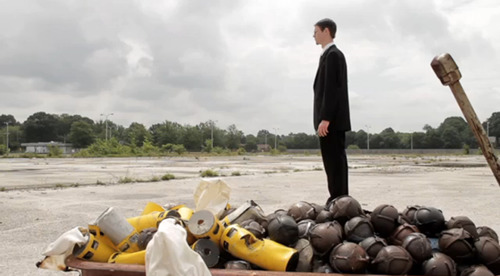 Julie Anne Genter from the Greens has raised an important issue.  It appears that many Kiwisaver funds have investments in the manufacturers of cluster bombs.

Put to one side the morality of this sort of investment there are also legal issues which cannot be ignored.

Under section 10 of the Cluster Munitions Prohibition Act 2009 a person commits an offence who “provides or invests funds with the intention that the funds be used, or knowing that they are to be used, in the development or production of cluster munitions”.  The potential penalty is a jail term not exceeding 7 years or a fine not exceeding $500,000, or both.

There was this fascinating exchange between Genter and Paul Goldsmith in Parliament yesterday about the issue.

Genter managed to Goldsmith to concede that there may be a risk that the Act applies.  There should be panic in the Beehive right now in assessing the implications of this.

So we have this strange situation where there is a law banning investment in the manufacture of these weapons yet there is tacit support by the Government of entities which are investing in the manufacture of cluster bombs.  And now that the news is out there are potentially many ordinary kiwis who now know that further contributions to their Kiwisaver accounts are being used for this purpose and this may arguably mean they are breaking the law by depositing further funds.

And what about the Crown?  It is bound by the Act.  Every time the Crown contributes to someone’s Kiwisaver account who then invests in cluster bomb manufacturers it may be complicit in the breach of the Act.

John Key is relaxed about the situation.

The government is dismissing concerns about some KiwiSaver funds being invested in companies making bombs and mines, with Prime Minister John Key saying it is up to individuals to find out where their money is going.

RNZ revealed today that at least five of the nine default KiwiSaver providers invest in anti-personnel mine and cluster bomb manufacturers, despite it being illegal for government agencies to invest in them themselves.

Hundreds of thousands of KiwiSaver members might be unknowingly investing in those companies, and the Green Party and Amnesty International have called on the government to review default providers that might have investments in these weapons.

But the Prime Minister said it was not a big enough issue to review default providers.

Mr Key said the onus was on each individual investor to find out where their money was going.

“Some KiwiSaver managers will have a different view on those issues, they’ll set the demarcation line in the different place, it just depends on who they are.”

Key may be relaxed on the issue but I suggest that you contact your Kiwisaver provider and ask if they manage any funds that do not invest in cluster bombs and transfer all your savings into those funds. Or find an ethical Kiwisaver provider.  It looks like Kiwibank’s Kiwiwealth scheme may qualify.