Been doing my usual look through the stats on the site (and testing the database link), so I thought I’d share them. The last week of 2012 isn’t quite correct because we haven’t finished yet, and we started the site in week 32 of 2007.

The average daily comments by week for 2012 are pretty healthy. 2012 was a post election year, and on a political blog you’d expect to see that the rate of increase reduces in the year after the election. You can see that happen after 2008 where 2009 was much the same (despite the increase in page views). However 2012 was consistently higher than the election year 2011.

Click on the image to see the higher resolution. 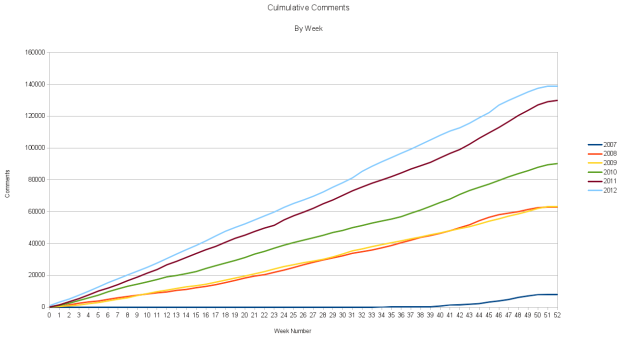 I’m pretty pleased with the comment’s growth. It looks like the policy of offloading all of the idiots to the sewer works well for steadily increasing rational dialogue on this site.

The detail shows that we’ve got the typical political issue driven comments. Much more spiky in an off-election year.