The most stunning moment in the Greek referendum result was the immediate resignation of Finance Minister Yanis Varoufakis. He had already said he would quit if the referendum was lost; nobody expected that he would go after such a convincing win.

But Varoufakis is not a normal politician. His humility and loyalty are exceptional traits, almost unknown in any Parliament. It would be a wonderful thing if his drive to put the party and people first was adopted by some long serving MP’s in the NZ Labour Party.

Varoufakis has recognised that progress requires constant refreshment and timely changes in personnel inside the team. If the Syriza leadership do manage to extract meaningful concessions from the financial fascists in Brussels, it will be in no small part because of selfless attitude of Yanis Varoufakis. There’s a lesson there for the learning.

Varoufakis announced his resignation in the modern way, on twitter and his personal blog. It’s worth a read:

The referendum of 5th July will stay in history as a unique moment when a small European nation rose up against debt-bondage.

Like all struggles for democratic rights, so too this historic rejection of the Eurogroup’s 25th June ultimatum comes with a large price tag attached. It is, therefore, essential that the great capital bestowed upon our government by the splendid NO vote be invested immediately into a YES to a proper resolution – to an agreement that involves debt restructuring, less austerity, redistribution in favour of the needy, and real reforms.

Soon after the announcement of the referendum results, I was made aware of a certain preference by some Eurogroup participants, and assorted ‘partners’, for my… ‘absence’ from its meetings; an idea that the Prime Minister judged to be potentially helpful to him in reaching an agreement. For this reason I am leaving the Ministry of Finance today.

I consider it my duty to help Alexis Tsipras exploit, as he sees fit, the capital that the Greek people granted us through yesterday’s referendum.

And I shall wear the creditors’ loathing with pride.

I shall support fully Prime Minister Tsipras, the new Minister of Finance, and our government.

The superhuman effort to honour the brave people of Greece, and the famous OXI (NO) that they granted to democrats the world over, is just beginning.

Look at the concepts he cites: duty, pride, collective action. They’re values, markers of class. The most quoted line is ‘I shall wear the wear the creditor’s loathing with pride’, but the most important sentence is this:

“We of the Left know how to act collectively with no care for the privileges of office.”

That should be the driving force for our Labour MP’s; putting the party and the people before the pleasures of a comfortable gig with ego fluffing status and gold standard pension rights. There aren’t many MP’s, let alone Ministers, in NZ who would turn down a limo and instead ride their motorbike to work meetings. Why is that? Why isn’t that modesty and the common touch the mark of all of our Labour MP’s? 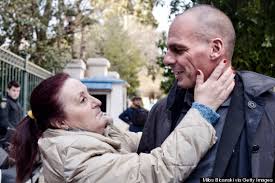 Varoufakis describes himself as an erratic Marxist. But he is not a inflexible demagogue:

To me, the answer is clear. Europe’s crisis is far less likely to give birth to a better alternative to capitalism than it is to unleash dangerously regressive forces that have the capacity to cause a humanitarian bloodbath, while extinguishing the hope for any progressive moves for generations to come.

For this view I have been accused, by well-meaning radical voices, of being “defeatist” and of trying to save an indefensible European socioeconomic system. This criticism, I confess, hurts. And it hurts because it contains more than a kernel of truth.

I share the view that this European Union is typified by a large democratic deficit that, in combination with the denial of the faulty architecture of its monetary union, has put Europe’s peoples on a path to permanent recession. And I also bow to the criticism that I have campaigned on an agenda founded on the assumption that the left was, and remains, squarely defeated. I confess I would much rather be promoting a radical agenda, the raison d’être of which is to replace European capitalism with a different system.

That quote above shows Varoufakis is able to synthesise radical economics with practical reality. Too many of our MP’s are not willing to even acknowledge that there are alternatives. I doubt that many have even read Marx, let alone understood his writings. Certainly, I don’t imagine any have the personal insight Varoufakis shows here:

My personal nadir came at an airport. Some moneyed outfit had invited me to give a keynote speech on the European crisis and had forked out the ludicrous sum necessary to buy me a first-class ticket. On my way back home, tired and with several flights under my belt, I was making my way past the long queue of economy passengers, to get to my gate. Suddenly I noticed, with horror, how easy it was for my mind to be infected with the sense that I was entitled to bypass the hoi polloi. I realised how readily I could forget that which my leftwing mind had always known: that nothing succeeds in reproducing itself better than a false sense of entitlement. Forging alliances with reactionary forces, as I think we should do to stabilise Europe today, brings us up against the risk of becoming co-opted, of shedding our radicalism through the warm glow of having “arrived” in the corridors of power.

Labour MP’s: If you’ve done 3 or 4 terms, it’s probably time to go. If you haven’t achieved what you set out to do by now, chances are, you’re never going to do it. If you’re a list MP, put the party first and let the leader know you’re not going to be around next election. If you’re an electorate MP, a winnable by-election in late 2016 or early 2017 would get the ball rolling for Labour going  into the next election.

Postscript: Why Common People? In a poptastic  quirk of fate, it seems likely that Yanis Varoufakis’s wife, Danae Stratou, an amazing person in her own right, was the inspiration for the wonderful Pulp song Common People. You couldn’t make this stuff up!

Everybody hates a tourist, especially one who thinks it’s all such a laugh.

81 comments on “Common People; Yanis Varoufakis is all Class. ”