Compare and contrast: Little vs Corbyn on immigration

Labour leader Andrew Little says ethnic restaurants should be employing New Zealand Indians and Chinese chefs instead of bringing in staff from overseas.

Mr Little said large inflows of semi-skilled migrants were putting pressure on jobs, especially in Auckland. If in Government, Labour would immediately place a cap on immigration levels until economic conditions had improved.

The Labour leader insisted Britain must instead celebrate the “enormous contribution to our society” that migrants have brought over the years and suggested the UK should look at immigration as “a very great opportunity”.

Migrants had “helped our economic growth and had boosted the NHS, the social services and education in the UK, Mr Corbyn said as he told his critics: “Don’t look upon immigration as necessarily a problem”.

Rather than looking to restrict immigration to the UK, the Government must be “far more focussed” on ensuring they deliver more doctors, school places and housing to meet demand in highly-populated areas.

Updated by r0b. I guess CV was unaware of this response by Little:

The way comments made by me have been reported are baffling. Of more concern, however, is that they may have offended anyone. I would never want for anyone in this country to feel they are being somehow targeted. That’s not what I stand for and it’s not what Labour stands for either.

I was asked last week by the Hutt News when I visited Lower Hutt about apparent concerns locals had with immigrant chefs. As I recall, I pointed out the China FTA specifically allows Chinese chefs to be recruited for Chinese restaurants and there was a case for other ethnic chefs to be recruited on the same basis.

I said at some point I would expect with larger ethnic communities that chefs would be able to be recruited within New Zealand. I said there was an issue with semi-skilled people being recruited under skills shortages categories but I doubt whether this related to chefs.

I was asked about Labour’s policy on immigration generally. I said our approach was that as the economy slows there is a case to “turn the tap down”. I also pointed out ours is a nation built on immigration and that people bringing skills here from all parts of the world is essential for us.share on twitter

I was asked about the same issues today by other reporters. I again pointed out the right under the China FTA to have Chinese chefs recruited into New Zealand. I repeated my statement about the immigration tap being turned down as the economy slowed. I said how important immigration was to New Zealand.

So, to be clear, Labour’s policy on immigration hasn’t changed. We need to moderate our intake at times when we are struggling to find jobs and houses for newly arrived folks as well as locals.

I will always support a progressive immigration policy and welcome all people who want to make a future for themselves and their families to be part of our beautiful country.

Here’s what I love. Labour’s gone and done some research and found out that a bunch of persuadable voters want something done about immigration. And they’ve looked at the US and UK and seen what a successful issue it can be…

There are almost certainly lots of people in the country that want the government to do something about ‘immigration’. But are there ten people in the whole country – outside of the Labour leaders’ office – who think we have too many skilled migrant cooks in our restaurants? It’s almost adorable the way they’ve tried to do something cynical, but executed it in a way that totally undermines their own attempt at divisiveness. 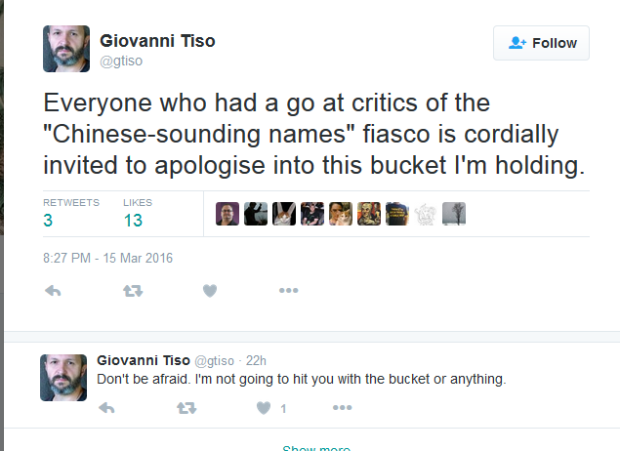 284 comments on “Compare and contrast: Little vs Corbyn on immigration ”