Confidence in Key govt falls off a cliff

Everyone’s been saying that 2010 is the year that Key has to make something of his turn in the big seat. Smile and wave is easy enough in the first year, people are willing to give you a chance. But at some point, the public expects a government to get to work tackling the big problems.

Unfortunately for National it displays no ability to do so.

The problems keep mounting: higher than expected unemployment and rising, falling wages, rising crime to name a few. And the government’s reaction is the same glib remarks that they got away with last year. Well, it looks like the public is tiring of it.

Then there’s the policy agenda. National’s making a real hash of it. It’s centre-piece policies – mining, national standards, Whanau Ora, health cuts, the foreshore and seabed, the supercity and the wealth transfer to the rich tax reforms, are all ticking time bombs and the ministers responsible seem both blithely unaware of the issues and unwilling to engage in genuine consultation.

On top of that, the stench of secrecy and corruption is tainting this government at a startling rate. It seems like the majority of ministers have been in the line for some breach of rules or ethics, and more are uncovered nearly every week. Far from being open and upfront as promised, Key’s reaction is shifty and slippery. We still don’t know why Richard Worth was fired/sacked or what was really behind the Phil Heatley resignation.

All these issues existing in the first year, what has changed is that the voters are withdrawing the free pass they gave Key last year. We can see the results. 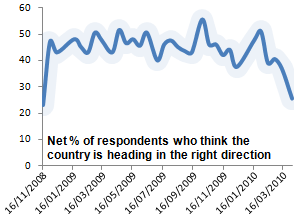 Roy Morgan asks respondents to its fortnightly survey whether they believe New Zealand is heading in the right direction or not. This question is used widely around the world and is seen as measuring the public’s confidence in the government.

Look what’s happened in the last two months: 51%, 39%, 40.5%, 37.5%, 25.5%. This is no freak result, it’s a pattern of steep decline. That’s basically one in eight voters changing from a positive view of the country’s direction under Key’s National Government to a negative one in just two months.

The challenge to Phil Goff and Labour is to make the most of this. Goff has to be prepared to take the fight to Key directly, especially when evidence of rorting or other misbehaviour by his ministers is discovered. The other side of the coin is to keep refining and articulating those simple core messages.

18 comments on “Confidence in Key govt falls off a cliff”