So, you’re one of the 900,000 Kiwis who have so far signed up to Kiwisaver. You know that you get $1000 on signing up, you put in 4% of your gross income, the Government matches that up to $20 a week, and your employer matches with at least 1% rising to 4% by 2011. It’s the best investment deal around. You’re smart and sensible to have signed up. You’ll get a nice big retirement nestegg and you are helping to create a domestic savings pool so we don’t have to borrow as much from overseas to grow.

Well, that’s what you thought. National would turn the 4% Kiwisaver into a 2% system. If that happens, you’re going to lose 2% a year from employer contributions come 2011, you’re going to lose some of your government contributions if your income is below $52,000, and you might find your employer gives you a smaller payrise to pay so that you end up paying for the employer contributions too. That great savings scheme just got a whole lot less great. Let’s look at the minimum amount of money you would lose as a Kiwisaver with National over and above any extra money you might get from National’s tax cuts. 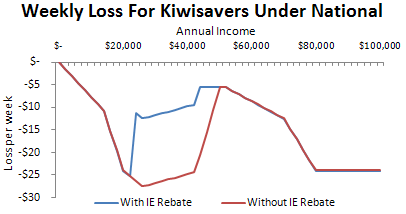 National’s tax package amounts to taking up to $27 a week off 900,000 Kiwis (and hundreds of thousands more on incomes between $14,000 and $44,000 who get bigger tax cuts from Labour) to give big tax cuts to a wealth few. Basically, they’re junking at least a million votes, many of whom would be swing voters, for the sake of giving a 1-3% increase in after-tax income to their base. They must be very confident or extremely foolhardy.

20 comments on “Confident or foolish? ”