Contrast the ways of ‘democracy’ 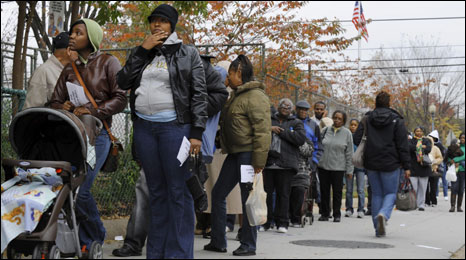 How not to vote (BBC)

How not to vote (Economist)

I’m happy to say that when I crawled out of my sickbed and voted this morning, it was nothing like the photos on the top and left.

I gather that we had queues at some of the major booths later in the day – Edendale primary (my old school) in Mt Albert for instance. However the contrast between the “democracy” displayed in these photo’s of the US and what we had today in NZ was immense. As No Right Turn pointed out the underfunded electoral system in the USA seems to be designed to disenfranchise voters.

So what’s wrong with this picture? Simply that it shouldn’t exist. The idea that people would have to queue for more than five minutes to vote in any advanced western democracy is absurd. The idea that they would be queuing out the door, for hours to do so is positively third-world. It speaks of an election apparatus so hideously underresourced that is simply not fit for purpose – unless the purpose is to stop people from voting rather than enable it.

Compared to the couple of minutes to do my vote today, the system in the self-professed democratic USA is strange. I’m just glad that we have a better funded and capable electoral commission out there. Thanks for your efforts leading up to this election.

Oh and the comments are now enabled.

6 comments on “Contrast the ways of ‘democracy’ ”