Corporate debt is the problem – not the answer. 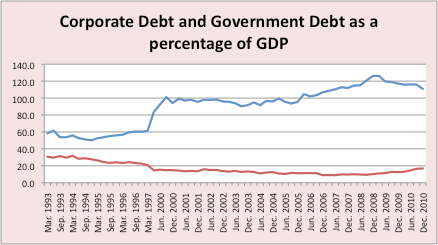 We keep getting told that Government is the problem and that the Private Sector is the answer. This Reserve Bank data indicates that up until 2008 Government Debt as a percentage of Gross Domestic Product (red) consistently tracked downwards. At the same time Corporate debt (blue), which includes the overseas debt of New Zealand banks and corporate entities, has reached a point where it is now over 110% of GDP.

In dollar terms Private Sector debt is currently over six times the size of Government debt.

Maybe it’s time for the major banks and corporates to feel the heat instead of the Public Service?

160 comments on “Corporate debt is the problem – not the answer. ”