Continuing our benefits theme, here’s a look at how much the benefit system costs you. The figures are the combined expenditure by the Government on the Unemployment, Sickness, Invalids’, and Domestic Purposes benefits per day per working age New Zealander, in 2007 dollars. 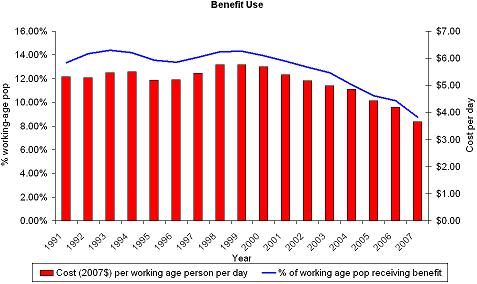 The portion of the working age population receiving a benefit is also included. As you can see, the numbers getting benefits and, so, the amount spent on benefits has fallen rapidly under Labour. The system costs less than $4 per adult a day.

Now, the Right tends to have a very punitive approach to benefits. They stereotype beneficiaries as lazy or morally deficient. John Key spoke of mothers on the DPB ‘breeding for a business‘ and, wrongly, said the numbers on the DPB were growing. With this view, they seek to punish beneficiaries with stricter requirements, lower payments, and â€˜work-for-the-dole’ schemes. None of that ever works. In fact, when National made their infamous â€˜Black Budget’ benefit cuts in 1991, they slashed beneficiaries’ spending power so much that other people lost their jobs and ended up on the dole queue too. Again, National is attempting to solve the symptom, not the problem; targeting beneficiaries, rather than the lack of decent jobs.

Labour has a full employment policy, and its approach in government has been to assist, not coerce, people into work. This approach is based on a fundamentally different worldview to National’s: people want to work, people do not choose to scrape by on $200 a week of handouts, they would prefer a job with the dignity, sense of purpose, and income it brings. This full employment policy and positive assistance to beneficiaries, through work training schemes and staff that don’t just hand out benefits cheques but work with individuals to get them in jobs again, has seen the number of people on benefits fall dramatically.