Well paint me red and call me Josef Stalin.  This post will probably invite SIS investigation of my background.

But I have been doing some reading into Cuba’s response to Covid and I must say that it is impressive.

Cuba is a not large island on the edge of the Gulf of Mexico.  It is home to 11 million people.

It has an extraordinary health system as summarised by this passage from the National Centre of Biotechnology information:

In high-income countries there is no relationship between per capita GDP and either of these measures of health status. For mortality under five years of age, the relationship disappears above a per capita GDP of $15,000; for life expectancy, there is some suggestion of a relationship up to $20,000 per capita. But the relationship is unclear among countries at the very lowest incomes. A fitted trend line would indicate a very powerful relationship, but comparison of individual country observations shows very large differences in health measures for countries with the same reported levels of income. Inter-country differences in factors other than income are obviously exerting a very powerful effect on health – which is not the case for higher-income countries.

And then there is Cuba.

High up on the far left for life expectancy, and low down on the left for under-five mortality (expanded circles), Cuba’s health measures are comfortably within the band of the highest-income countries while its per capita income, at $3,438, places it 86th among the 139 countries plotted – roughly in the middle of the third quartile. The health of Cuba’s population matches or exceeds, on average, that of the United States. Among countries with similar income levels, the best achieve under-five mortality rates twice that of Cuba, and the rest are three, four or five times as high. The best life expectancies are five years shorter; others are 10 or more years shorter. The differences are extraordinary.

It has the third highest number of doctors per head of population, behind the rich person enclaves of Quatar and Monaco.  And this is despite the fact that it has suffered a US imposed trade embargo for the past sixty years.  Who knows what could have happened if Cuba US trade had proceeded normally.  The embargo occurred because Cuba wanted to do what the US wanted European nations to do, which is to host nuclear missiles as a deterrent to the opposition starting a nuclear war.  The idea was crazy but the lack of balance is also crazy.

Cuba’s Covid response appears to be exceptional.  Because of its economic circumstances it has had to develop its own vaccines but results have been that promising that it has been able to export the vaccine to nations such as Vietnam and Venezuela.  The Nature website had this earlier description of development of the vaccines:

If everything goes to plan, Cuba could be the first Latin American country to develop and manufacture its own vaccine against COVID-19.

Vicente Vérez Bencomo, director-general of the state-owned Finlay Institute of Vaccines in Havana, where one of Cuba’s most advanced vaccine candidates was created, thinks the chances are good. The candidate, called Soberana 02, entered phase III trials in people in March. It’s one of the country’s two homegrown vaccines — the other is called Abdala — to make it this far.

And not a moment too soon. Although Cuba had few infections for most of 2020, COVID-19 cases began to rise in the 11-million-person island nation after it reopened its borders to tourism last November. Infections peaked on 24 April, with nearly 5,800 active cases.

Cuba is one of the last-remaining communist countries in the world, and has endured decades of trade embargoes imposed by the United States, cutting off its access to essential supplies. Vérez Bencomo says it is this history that has given the Cuban people an independent streak, spurring them to create their own COVID-19 jab rather than joining the international COVAX initiative, which aims to deliver vaccines fairly across all countries.

Even Soberana 02 has an independent streak, working differently from other vaccines in play. The jab is a ‘conjugate’ vaccine, one that links a weaker antigen with a stronger one to ensure a vigorous immune response. To make Soberana 02, Finlay scientists coupled fragments of the coronavirus spike protein to a deactivated form of tetanus toxin, a powerful antigen that can boost production of immune cells and antibodies.

Cuba was a late starter to vaccinating its population but as can be seen from these graphs its vaccination roll out has been superb. 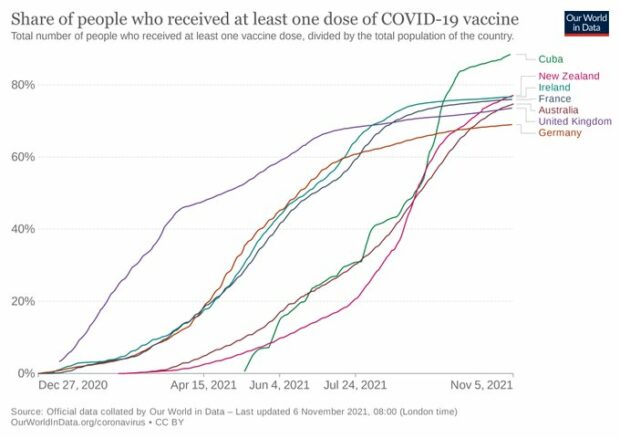 As it has reached high levels of vaccination the infection rate has declined. 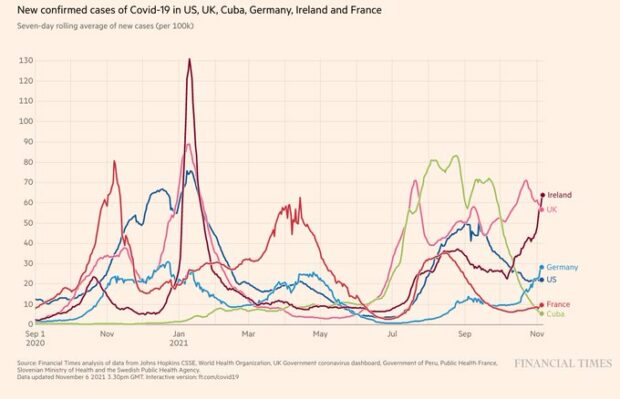 And deaths from the disease are well below those of wealthier more advanced nations. 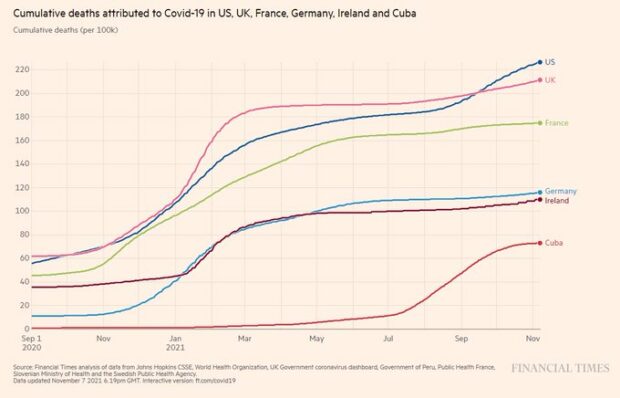 Cuba recently announced that children as young as two years of age would be vaccinated.  I suspect other nations are contemplating the same response in an effort to reach herd immunity.

There is a strong message here.  Respect for the science and making sure that no one is left behind can work.  America could learn a lot from the Island nation south of its borders whose economy it has sought to ruin for the past six decades.