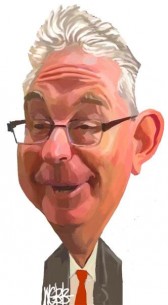 Chair of the Tax Working Group (TWG), former Labour Party finance minster, Sir Michael Cullen, today gave numerous hints that any proposed recommendations from the group are unlikely to be a radical shake-up of the tax system because of the need for political expediency.

In a revealing interview with Kathryn Ryan on RNZ, Cullen said that because Labour has said the group’s recommendations would not be enacted until after the 2020 election, the next election will effectively become a referendum on tax.

He described Labour’s commitment on this as brave (foolhardy?).

“It’s not exactly brilliant in terms of winning elections,” he said.

The TWG has already been largely neutered by the terms of reference which has proscribed any capital gains tax (CGT) on the family home, any hike in income taxes or GST, or reintroducing an inheritance tax.

The appointment of the clearly politically biased Cullen was rightly seen as controversial. During his nine-year tenure as finance minister Cullen had ample opportunity to introduce a CGT, but failed to address the glaring inequity in the tax system whereby income from labour is taxed and income from assets is largely tax-free.

Cullen made it clear he has not changed his view from when he was finance minister, that a CGT, particularly if applied to the family home, is political suicide, despite recent polls showing a significant shift towards a majority favouring a CGT.

“I don’t think there is the slightest prospect in the foreseeable future… of any New Zealand government going to vote to introduce a capital gains tax on a family home. It is a recipe to have a very short period of capital gains tax and very long period in opposition,” Cullen said.

In fact, Cullen gave an indication he quite likes the status quo and noted that radical tax reform is difficult to enact in MMP due to the difficulty of marshalling sufficient support from enough parties to pass legislation.

Cullen said the tax system had worked well for some time, although he was open to the idea of taxes to change behaviour in respect to the environment, as had already been tried with tobacco and alcohol.

He disputed claims that New Zealand had a broad-based tax system, noting that we don’t have hypothecated social security taxes, have no inheritance tax and very little tax on assets or wealth.

Environmental taxes, effectively another form of consumption tax designed to change behaviour, would clearly be an issue to be addressed for the TWG, he said. A problem with such a tax was that it tended to fall more heavily on people on lower incomes.

Taxpayers paid most of the costs of “externalities” caused by companies that pollute.

He noted the mining industry was taxed at a lower rate than other industries that cause less pollution.

“These are some of the issues that need to be addressed.”

He rubbished as nonsense the views of tax experts and economists who promote the efficient market hypothesis – the idea that taxes should not try to change behaviour because markets tell politicians what our best behaviour should be.

The main problem with introducing taxes to change behaviour, particularly to reduce pollution, is the transitional costs – particularly if whole industries and the people who work in them are disrupted.

Cullen said New Zealand had many environmental problems that had built over a long period, partly due to ignorance and partly due to past inaction.

Environmental taxes could impact relatively quickly, while CGT taxes took many years before revenue became significant. Cullen noted that a CGT on land values however, could have a rapid impact on farm values.

“It would have the potential risk of putting a number of farmers in a position where they had negative equity.”

In the long-term such a tax might be helpful in terms of curbing the excessive values put on farms, which is tending to exclude family concerns in favour of corporate entities.

A water tax would definitely be on the agenda. So long as it applied to all, it would not cut across trade agreements. Regional bodies mostly favoured the concept as it would help them deal with the rising cost of dealing with the politically sensitive issue of deteriorating water quality.

Maori also supported the idea, but Cullen said it was problematic there is no central Maori entity to discuss the issue that all Maori recognised. Cullen, who fell in a political hangi over the Foreshore and Seabed issue, said he had already talked to a range of Maori on the subject “and they all think there is a deal to be done”.

Such a tax would help Maori and NZ Inc, he added.

Cullen said that if the group decided on some form of extended CGT, then it was almost certain to be on realised gains rather than paying on the way through. By excluding the family home, it severely reduced the CGT base, but that did not mean it was not worth doing, Cullen said.
“There is still a large base on which a CGT could apply.”

The political problem for a CGT was that because it took a long time for revenues to come through, it was hard to set corresponding reductions in income tax or GST and given the short political cycle it was hard to sell politically and relatively easy to be reversed before its full effect was felt.

Because of the ageing population, it was however likely that more tax would have to come from capital taxes than labour.

Cullen downplayed the size of intergenerational issues on taxation saying that while the new generation was paying some fees for tertiary education, two thirds were still covered by the government, loan interest was zero if you stayed in the country, and now the first year of study was free.

New Zealand was much better placed than most nations in terms of its government debt “and there was no need to panic over the size of the problem.”

The TWG will next week publish a background paper outlining the current tax position and the options available to the group.

People can submit to the group on [email protected]